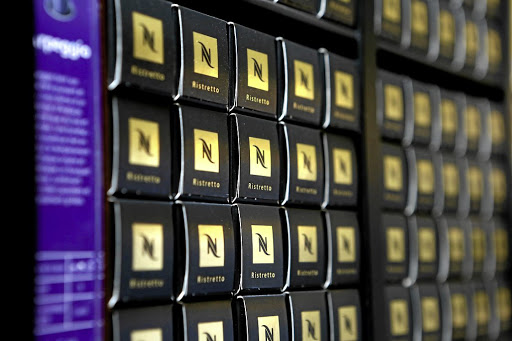 Boxes of Nespresso coffee pods are pictured in the supermarket at Nestlé’s headquarters in Vevey, Switzerland. Picture: REUTERS

Swiss food giant Nestlé’s sales grew at more than twice the rate analysts expected as it sold more Nespresso capsules to people working from home and restaurants in Asia stocked up as they started reopening.

The Hot Pockets maker is benefiting from the best of both worlds: people stuck at home buying coffee and convenience meals, and other markets reopening restaurants that need to replenish kitchen supplies.

Nestlé’s first-quarter report is one of several signals on Thursday from companies including Hermes and Pernod Ricard that a consumer rebound is in full swing. It also shows how the food industry is embracing e-commerce, as online sales surged 40% and now make up a sixth of Nestlé’s sales.

Nespresso’s 17% sales growth turbocharged the results, which were strong worldwide. A surge in China made Asia its best-performing region. Shoppers in the US loaded up on Stouffer’s and Lean Cuisine convenience meals, while Nescafe and Starbucks coffee products were strong in Europe.

The 7.7% adjusted sales increase in the first quarter is the fastest in a decade, according to Sanford C Bernstein. That sets Mark Schneider up to reach his long-term goal of annual mid-single digit growth four years after he became CEO. The stock rose as much as 3.7%.

The decline in out-of-home sales to places such as hotels, restaurants and canteens moderated to 12% from 26% in the second half of 2020. While that business returned to growth in China and Japan, Nestlé expects a full recovery to pre-pandemic levels at the earliest in 2022. In the meantime, the company is coming up with new ways to revive the business, such as contactless coffee machines and supporting takeaway services.

Out-of-home revenue accounted for about 10% of total sales before the pandemic.

Analysts will probably increase their organic-sales estimates to the higher end of a 4% to 5% range, according to Cedric Besnard, an analyst at Citi.

“The debate this morning will be around why guidance isn’t being upgraded, given that solid mid-single digit growth for the year now looks well within reach,” said Bruno Monteyne, an analyst at Bernstein.

In February, Schneider said sales growth may cross the threshold of 4% in 2021 and should at least match last year’s 3.6% pace.

“It certainly sets a high bar for those in the sector who have yet to report,” said RBC analyst James Edwardes Jones. “While we don’t expect growth of this magnitude to be sustainable it is nonetheless very impressive in our view.”

Ingka Group will invest in wind and solar projects, electric-vehicle charging points and other projects to be climate-positive by 2030
Companies
2 weeks ago

Tale of love, revenge and death promises to give House of Gucci kiss of life

Brand will not be hurt as movie has an an exceptional cast, marketing academic says after sales drop
Companies
1 month ago
Next Article