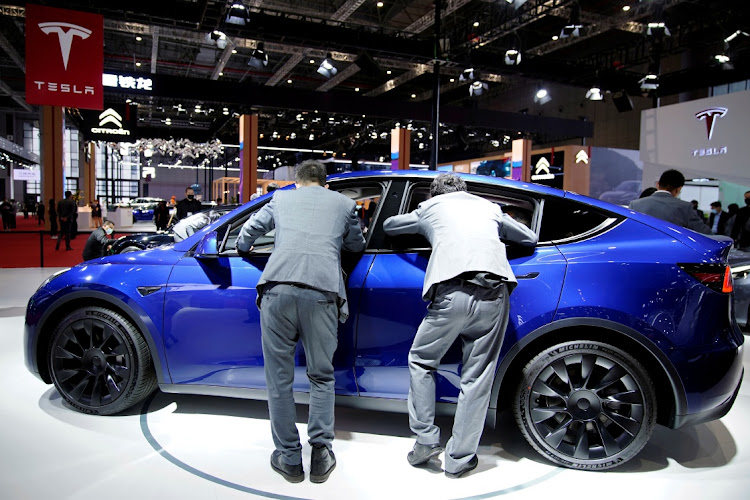 Visitors scrutinise an electric vehicle displayed at the Tesla booth during the Shanghai Auto Show in Shanghai, China on April 20 2021. Picture: REUTERS/ALY SONG

After a dream run that saw it receive backing from the highest levels of the Chinese state, Tesla is getting a reality check, with the vehicle maker coming under fire for how it treats its customers in the world’s largest, and increasingly most competitive, car market.

Earlier this week, the California-based company found itself on the pointy end of missives from two government entities, both of which criticised its attitude towards consumer service. The drubbing came after Tesla endured an embarrassing outbreak at the Shanghai Auto Show on Monday, during which the owner of one of its electric cars said she almost died because her car’s brakes failed.

The unwanted publicity comes at an uncomfortable time for Tesla, which, since breaking ground on its Shanghai Gigafactory in early 2019, has enjoyed an enviable run in China, receiving all-important support from the government and appearing to skirt the tensions between Washington and Beijing. The world’s biggest maker of electric vehicles (EVs) has extracted perks other international companies have struggled to obtain, including tax breaks, cheap loans and permission to wholly own its domestic operations.

The first rebuke came early on Tuesday when China’s state-run Xinhua news agency published an article that said the quality of Tesla’s EVs must meet market expectations to win consumer trust. Tesla should address consumer hesitation over buying its cars after issues ranging from malfunctioning brakes to fires during charging emerged, the article said.

A few hours later, the commission for political and legal affairs of the Communist Party of China central committee weighed in, posting a commentary on its WeChat account saying Tesla should respect Chinese consumers and comply with local laws and regulations. Making an effort to find the cause of problems and improve features is something any responsible business should do, and Tesla hasn’t done that, the Communist Party body that oversees China’s police, prosecutors and courts said.

Tesla has also come under fire for its perceived arrogance towards car owners. Many have taken to social media to complain about its lack of customer service

The blowbacks stem from an incident on Monday at the Shanghai Auto Show when a woman climbed on one of Tesla’s display vehicles shouting that her car’s brakes had lost control. Her protest was captured by scores of onlookers who then uploaded the footage to social media, helping it go viral. Tesla’s booth at the show had a noticeably increased security presence the next day.

After initially pushing back against the woman’s claims, saying she was “widely known” for protesting against Tesla, the EV maker struck a more conciliatory tone in a statement late on  Tuesday, apologising for the delay in resolving her problems.

“Tesla appreciates the trust and tolerance given by our car owners, netizens and media friends, and actively listens to the suggestions and critics,” it said. “To make up for the discomfort of the owner as much as possible and the negative impact on her car-using experience and life, we are always willing to try our best to actively communicate with her and seek solutions with the most sincere attitude.”

On Wednesday, the Communist Party’s discipline commission said in a separate commentary that Tesla’s apology shows a better attitude than before. The woman who protested, meanwhile, is being detained for five days.

It isn’t the first time Tesla has had to defend itself and its actions in China, which is now one of its largest markets. In fact, demand from Chinese buyers helped Tesla report estimate-smashing deliveries of EVs in the first quarter, prompting Dan Ives at Wedbush to note that the “eye-popping numbers” coming out of China cannot be ignored.

In March, Tesla had its cars banned from military complexes in China because of concerns about sensitive information being collected by cameras built into the vehicles. And in February, it was forced into issuing a public apology to China’s state grid after a video purportedly showed staff blaming an overload in the national electricity network for damage to a customer’s vehicle.

After the military order, CEO Elon Musk strenuously denied the company would ever use a car’s technology for spying, and Tesla’s Beijing unit said cameras built into its EVs aren’t activated outside North America.

Tesla’s China honeymoon appears to be coming to an end right as the EV maker faces increasing competition from a slew of younger, cashed-up local EV players such as the New York-listed Nio and Xpeng. Their presence at this year’s Shanghai Auto Show was telling, with their large, shiny booths overshadowing exhibits from some of the more traditional carmakers.

Chinese EV makers such as Nio and Xpeng not only enjoy the support of municipal governments in China but are also riding a wave of nationalist sentiment that has ensnared other international names. Earlier this year, Swedish clothing giant H&M was criticised by state entities for an old statement on its website about forced labour in the contentious Chinese region of Xinjiang.

In September, Nio CEO William Li, speaking at the Beijing Auto Show, waxed lyrical about customer service, saying that it’s more important than volume. Freeman Shen, the founder and CEO of another EV start-up WM Motor, noted that Tesla in China is “just like Apple in the early days, they educate the whole market”.

Tesla has also come under fire for its perceived arrogance towards car owners. Many have taken to social media to complain about its lack of customer service and seeming disinterest in addressing problems. Others are angry that they’ve purchased a Tesla only to discover the company steeply discounted the same model weeks later.

However, for all the grumbling, Tesla’s cars remain hugely popular in China. A record 34,714 China-built and imported Teslas were registered in the country in March, almost double the 18,155 registrations in February, when the week long Lunar New Year holiday slowed sales, and almost triple the number a year earlier, when the nation was in the grip of coronavirus lockdowns.

Coinbase valuation drops to $67bn as trading jitters creep in

Coinbase valuation drops to $67bn as trading jitters creep in