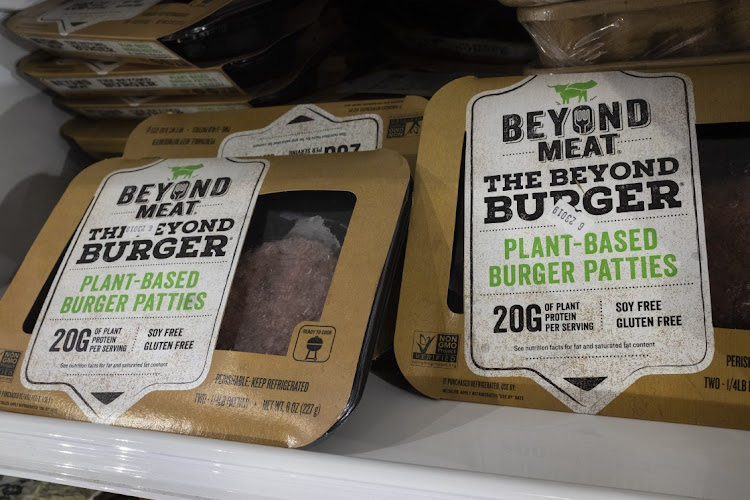 Beyond Meat products in a store in New York City, the US. Picture: DREW ANGERER/GETTY IMAGES

Bengaluru — Beyond Meat  said on Tuesday it had formed a joint venture with PepsiCo  to develop and sell snacks and beverages made from plant-based protein, sending shares of the faux-meat maker to an 18-month high.

The deal was the latest in a run of marketing successes for Beyond which include a distribution deal with Walmart, and partnerships with restaurants including Taco Bell, KFC and Starbucks.

The company's burger patties and sausages have been among the leaders in the surge in interest in plant-based alternatives over the past two years as consumers worried about their health, animal welfare and food safety.

However, it reported a surprise easing in sales in the three months to October as a boom at the start of the Covid-19 crisis tapered off.

The new partnership will give the plant-based meat maker access to the beverage giant's distribution and marketing resources and allow it to expand into new product lines, Beyond Meat CEO Ethan Brown said.

PepsiCo, which apart from its namesake cool drink, owns the Lays, Quaker and Doritos brands. It has also been looking to expand its portfolio of health-focused snacks and beverages.

Beyond Meat said it could not provide additional details of the new deal as many of the snack and beverage products being made under this partnership were still under development. The operations will be managed through a newly created entity, PLANeT Partnership.

“Any time a relatively small company can partner in any way with a global behemoth like PEP, it's usually good news,” JPMorgan analysts said but questioned the true benefit of the deal.

“Is there a huge, uncounted population clamouring for vegan Doritos? Probably not, in our opinion, and surely not big enough to justify this kind of stock move.”

The food maker has a factory in the country and if it can win over even a small fraction of China’s 1.4-billion people, the rewards could be huge
Companies
11 months ago

Plant & Bean’s new factory will eventually churn out 55,000 tonnes a year of alternative protein products
Companies
11 months ago
Next Article