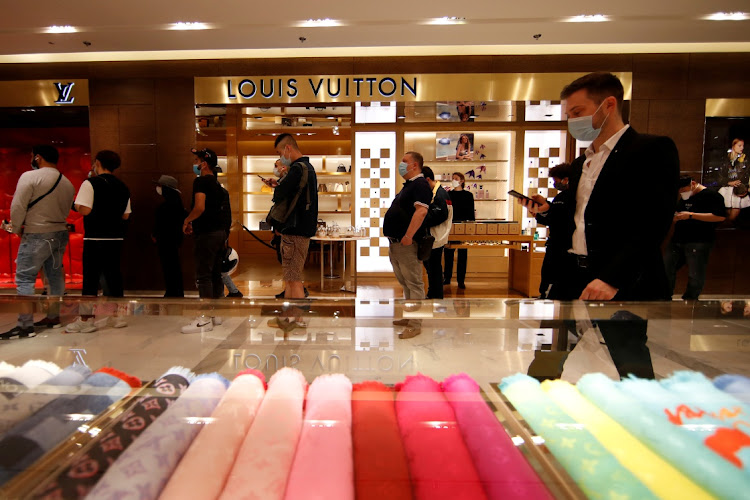 Customers in masks queue at a Louis Vuitton shop in Paris, France, May 28 2020. Picture: REUTERS/GONZALO FUENTES

Paris  — LVMH’s customers are curbing purchases of high-end fashion faster than the company can cut costs, and that is hitting the Louis Vuitton owner’s profit.

The French luxury conglomerate’s profit from recurring operations totalled €1.67bn in the first half, less than the €2.32bn analysts expected.

With boutiques shut down worldwide and international tourism largely halted, revenue fell 38% on an organic basis in the three months through June, the company said in a statement on Monday. CFO Jean-Jacques Guiony said LVMH slashed operating costs by 29%.

“LVMH showed relative resilience at the revenue level in the first half of the year,” said Luca Solca, an analyst at Bernstein. “On the profit side, it’s obvious that it’s not been able to slash costs with the same pace as the revenue decline due to the fixed-cost base.”

The company’s American depositary receipts fell as much as 2.8% and traded about 2% lower in the afternoon in New York.

LVMH follows Richemont and Burberry in reporting what analysts expect will be the industry’s worst quarter ever because of the pandemic. The company cited signs of recovery across several businesses in June and a particularly strong rebound in China, and said it expects further improvement in July.

The company reacted “swiftly to the adverse situation”, Guiony said on a call with analysts. “We expect to keep the cost base under control.”

Guiony said in an interview with Le Figaro that LVMH still expects to respect the contract signed for its planned purchase of jeweller Tiffany.

“Tiffany’s results are clearly affected by the crisis,” the CFO told Le Figaro. “That said, we have signed a contract and we will respect it.”

Guiony told analysts on the call that LVMH is still waiting for about half a dozen antitrust approvals for the Tiffany deal, adding that “things are moving forward”.

While shoppers are increasingly turning to online purchases, the luxury industry has notoriously been slow to generate more revenue that way. LVMH noted a “significant acceleration” in online sales in the first half, which only partially offset the store closures.

After months of restrictions that have shut shops and factories, Bain estimates sales could fall as much as 35% in 2020
Companies
11 months ago

But Richemont has been building a powerful digital business, positioning it to benefit from a surge in online shopping
Opinion
1 year ago

LVMH’s conversion of perfume factories to be able to manufacture hand sanitiser is a good example of a business that understands exactly what its ...
News & Insights
1 year ago
Next Article