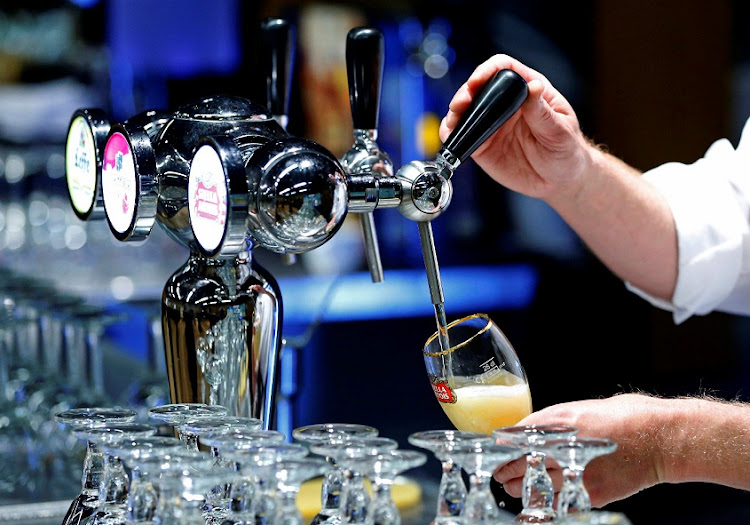 A waiter serves a glass of beer ahead of an Anheuser-Busch InBev shareholders meeting in Brussels in this April 30 2014 file photo. Picture: REUTERS

Johannesburg/Harare — A plan by Zimbabwe’s largest brewer to only accept hard currency amid a severe dollar shortage was thrown into doubt on Thursday after a minister said the government would not allow it to go ahead.

Delta Corporation, 40% owned by Anheuser-Busch Inbev, said on Wednesday its beverages subsidiary would accept hard currency only from January 4 to help it cope with a crippling shortage of US dollars in Zimbabwe.

Industry and commerce minister Nqobizitha Mangaliso Ndlovu, in comments published on the Good Morning Zimbabwe news site on Thursday, said the government would not allow the plan to go ahead and would be holding talks with the company.

“I have seen it [the letter from Delta to customers advising of a new pricing structure] but I think we should be meeting them on Friday. That cannot be allowed,” Ndlovu said.

Dollar shortages have left many businesses in Zimbabwe struggling to operate and Ndlovu’s comments indicate the worsening currency crisis could drive a wedge between business and the government.

Accepting only certain forms of payment is illegal and a step taken in bad faith, Ndlovu said, but he did not say which laws would be broken.

“Government is very clear that this practice is unacceptable and has to stop forthwith and if not, the law will take its course,” Ndlovu said.

“At the centre of the relationship between government and business is the spirit of engagement and a two-way communication between all parties. That spirit is defeated when one of the parties decides to unilaterally pronounce decisions against both the text and spirit of agreed principles.”

Under Delta’s plan, from January 4 the company would not accept payments in electronic dollars or a quasi-currency known as bond notes, which most Zimbabweans are paid in.

The dollar shortage has pushed inflation in Zimbabwe to a 10-year high and prompted shortages of basic goods six months into the term of new President Emmerson Mnangagwa.

The president had promised to fix the crisis, but his administration now faces push-back from businesses over its handling of the currency crunch, just as doctors stage a nationwide strike demanding better pay and conditions.

Zimbabwe adopted the use of foreign currency, mainly the US dollar, in 2009 after its own currency was beset by hyperinflation, but a severe shortage of physical notes has seen deposits in Zimbabweans’ bank accounts lose value compared with cash.

The central bank issued a quasi-currency, pegged to the dollar and known as bond notes, in a bid to fix the shortage, but this too lost value against the dollar.

Ordering a Coke in Harare is a challenge because fast-food outlets, restaurants and eateries have run out of stock
Business
3 years ago

Almost two years ago, SA shareholders of SABMiller voted to sell to global giant AB InBev. From their perspective it has not delivered great results
Opinion
3 years ago
Next Article