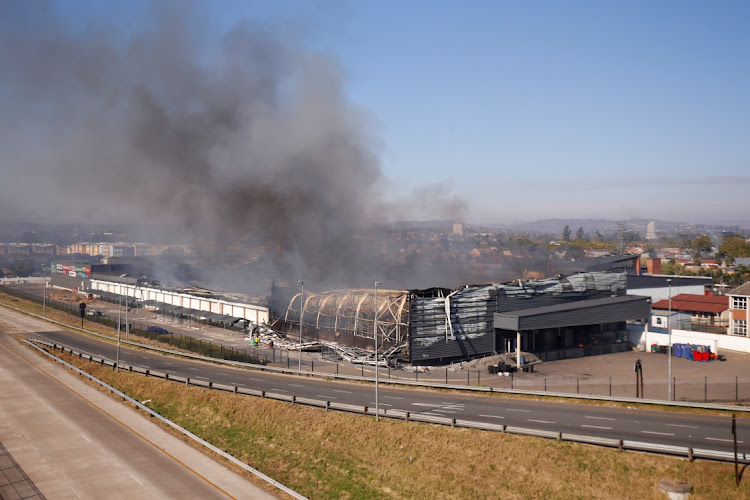 Brookside Mall in Pietermaritzburg burns after being looted as protests continue following the imprisonment of former president Jacob Zuma, on July 12 2021. REUTERS/ROGAN WARD

Mall owners have heightened their private security or closed their shopping centres to protect customers from looters and rioters especially in Gauteng and KwaZulu-Natal.

More than 200 malls have been looted or destroyed and more than 600 stores have been torched or damaged since violence broke out at the weekend, the SA Property Owners Association (Sapoa) said in a statement on Tuesday.

The body that represents 800 member companies and organisations said the situation is getting worse and that the authorities trying to calm the situation are overwhelmed.

Sapoa CEO Neil Gopal said though President Cyril Ramaphosa had undertaken in his speech on Monday to provide sufficient security to prevent further destruction, “looting is continuing and the police and private security are not coping”.

Landlords have been trying to gather information about which of their properties have been damaged.

A number of them have declined to comment, saying it is difficult to assess what will happen to their centres, many of which are worth hundreds of millions of rand.

Sapoa’s statement was released soon after landlord Attacq announced the closure of Mall of Africa, the country’s largest centre built in one phase, as well as businesses in Waterfall City and Waterfall Corner.

Other retail centres in affluent Gauteng areas have been trading with reduced hours, while a number of malls in townships and semiurban areas have closed until the violence abates.

Owners of retail centres in riot hot spots such as Soweto say they are hopeful the police and military will spearhead the response to the unrest.

Laurence Rapp, CEO of Vukile Property Fund, said though they have increased security, they “fully expect the primary responsibility for security” to be provided by the police and SANDF.

Listed landlord SA Corporate Real Estate also reported on Tuesday that a number of its retail centres have been damaged.

“SA Corporate’s retail shopping centre properties have suffered various degrees of damage due to criminal actions perpetrated by people participating in the unrests in KwaZulu-Natal and Gauteng over the past few days,” it said.

Properties in KwaZulu-Natal that have been affected by extensive looting and associated damage include Umlazi Mega City, the 75%-owned Springfield Value Mart, Pine Walk Centre and Davenport Square, it said.

SA Corporate’s centres in Gauteng such as Khan Corner, Normandie Court and Queens Court were damaged.

None of the company’s residential properties have been affected.

“SA Corporate continues to work closely with local law enforcement, security providers, property managers and other relevant parties to maintain the safety of customers and tenants and to protect SA Corporate’s properties during this volatile time,” the company said.

Gopal said Sapoa is not in a position to deploy private security.

“Sapoa cannot do this as we are an NGO [non-governmental organisation]. Private security can also not manage a mob of 500 people. It’s not possible,” he said.

Hyprop Investments, the owner of blue chip malls such as Mall of Rosebank, Hyde Park Corner and Clearwater Mall, said all its shopping centres continue to trade but closed earlier than normal.

Correction: July 13 2021
A previous version of this story incorrectly stated that the Mall of Africa is SA’s largest mall. It is, in fact, the country’s largest centre built in one phase.