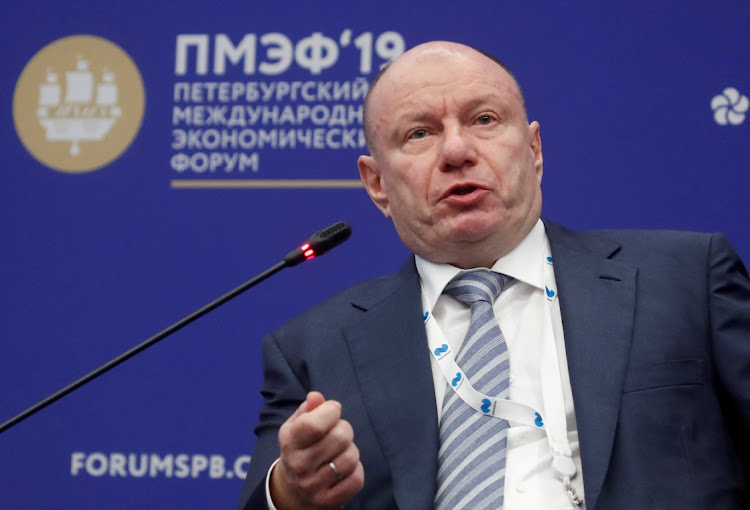 Russian oligarch  Vladimir Potanin says he is ready to discuss a possible merger between his mining group Norilsk Nickel and aluminium producer Rusal, a move that could strengthen their defences against any possible Western sanctions against them.

Potanin told RBC TV he had sent a letter on Monday confirming his agreement to start merger discussions, citing the desirability of creating a “national champion” and building up “extra stability against sanctions”.

The initial proposal, which would create a company with a combined value of about $60bn — similar to Glencore — came from Rusal management, he said.

Rusal is the world’s largest aluminium producer outside China. The Kremlin, which closely monitors tie-ups between strategic Russian companies, said it was unaware of merger plans.

Hong-Kong listed shares at Rusal rose by 11.35%, while Norilsk, the world's largest producer of palladium and refined nickel, was down 3.8% in Moscow.

Neither company has been directly targeted by Western sanctions imposed on Russia over the war in Ukraine, though Potanin himself was hit by British sanctions last week.

A tie-up would create a global base metals giant with combined revenue of $30bn. Norilsk’s palladium and nickel account for 40% and 7% of global mine production of these metals, respectively. Rusal produced 6% of global aluminium output in 2021.

Analysts said their combined clout could deter the West from imposing sanctions for fear of sending prices soaring for metals that are critical to its own industries.

The combined company would be “practically invulnerable to sanctions, as global markets are critically dependent on their products. Especially with the green agenda in mind,” said Evgeny Kogan, professor at the Higher School of Economics in Russia.

‘Too big to sanction’

“The argument ‘too big to sanction’ sounds plausible,” said Maria Shagina, sanctions expert at the International Institute for Strategic Studies.

“I still think that the US and the EU are not ready for the repetition of the April 2018 sanctions on Rusal.”

Rusal was subject to US sanctions between April 2018 and early 2019 that caused a jump in global aluminium prices. Washington removed Rusal from the sanctions list when its founder Oleg Deripaska agreed to relinquish control of it.

Deripaska, still on the US sanctions list, remains a powerful tycoon in Russia. His relations with Potanin are chilly.

Potanin and Rusal own 36% and 26% of Nornickel, respectively, which had a market value of $49bn at Monday's closing prices, according to Refinitiv Eikon data, compared with Rusal’s market capitalisation of $15bn.

Potanin has swooped aggressively to grab new opportunities since Russia sent troops into Ukraine and the ensuing sanctions transformed the business environment.

His Interros group snapped up Rosbank from Societe Generale when the French lender exited the Russian market, before buying a 35% in TCS finance group at what its founder, Oleg Tinkov, said was a knock-down price.

The tycoon’s public statement was unusual because he typically maintains silence until his deals are clinched.

His comments came less than a week after Britain slapped sanctions on Potanin and six months before the expiry of Norilsk’s 10-year shareholder agreement that made him president of the miner — signals that the move was driven by multiple factors.

“Instead of leaving the company, as many other big businessmen have done recently [after Western sanctions on them], a more elegant solution may be found — to merge with Rusal,” Kogan said on social media.

Interros Holding, which manages Potanin’s assets, did not reply to a request for additional comment.

The shareholder agreement, which expires on January 1, covers the size of dividends at Norilsk, which has been the main reason for on-and-off rows between shareholders at Norilsk and Rusal over the past 14 years.

The potential deal is a risk for Norilsk’s future dividend payments and would provide limited financial synergies, analysts at BCS said in a note.

Potanin said that the size of dividends to which investors at Norilsk have become accustomed in recent years will certainly not be available in 2022 nor presumably in 2023.

While Western sanctions have not directly targeted Norilsk, they have caused problems with trade finance and logistics.

“Potanin is flagging that they are under pressure from sanctions,” said Tom Price, head of commodities strategy at Liberum in London. “Big miners always seek low-cost funding. But the ability of Russia’s miners to do that has been severely restricted.”

Jack Sweeney, who followed Elon Musk’s jet, now targets the billionaires after the Ukraine invasion
News
5 months ago
Next Article