Q&A: A good time for gold miners in SA

Harmony CEO, Peter Steenkamp, does not believe the SA discount applies. Rather, it comes down to margins. 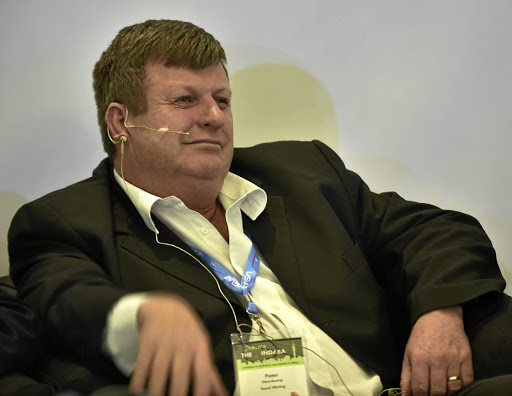 As gold miners bask in the glow of strong metal prices, Harmony Gold too has reported a strong rebound in earnings and announced investment in a pipeline of projects that will maintain its production profile and boost its profits in years to come. CEO Peter Steenkamp says it’s a good time to be a gold miner in SA.

Q: Investors and analysts often talk about the SA discount, particularly in relation to gold mining. From your view as a miner highly exposed to SA, is there really one?

A: Personally, I don’t necessarily believe that. It is all about margins. If you look at, for instance, Anglo Platinum, they’ve got good margins, and I don’t think they’ve got a discount as far as the portfolio is concerned. We as Harmony didn’t have that quality of ore bodies [but] we’ve got better quality ore bodies now which we have managed to gain in the last few years. So, that will obviously stand us in good stead.

Q: Your price to earnings (p:e) ratio is higher than Gold Fields and even AngloGold Ashanti, which has exited SA assets entirely after it sold its Mponeng mine to Harmony Gold. What do you think is behind your relatively high p:e ratio?

A: I can’t comment on that, that’s the market. But I think it gave us a lot of credit for the transactions that we’ve done. I was actually commenting about my first session [with investors] in 2016 … I had hardly come into the company and I walked into a very hostile kind of event. Now, I think we’ve got investors that support us. We’ve got people that understand the company, and I think we built a track record of delivery.

Q: But unquestionably you are more exposed to SA than your peers. How does that affect the investment case?

Q: The underlying socioeconomic troubles of the country are surely not good for business. Is deepening poverty and record unemployment affecting your operations?

A: Not at the moment, no. I think we identified this as a risk quite a while ago, and certainly through our team here, and the leadership of Mashego Mashego, our director of corporate affairs, we have quite a proactive way of dealing with communities which we introduced some time ago. I think we also come from a community where mining is well entrenched, there’s not a lot of demands like you see in other communities where they demand that the miners actually shouldn’t be there. But certainly we are very aware of the risks we’re facing, and how to manage these. And we’re not the only company that operates in an environment that is difficult. You can find the same in South America and other places in Africa.

Q: Looking at potential acquisitions, while other majors have made it clear there are no good gold assets left in SA, what is your stance on more local investment?

A: The assets that we have bought were good assets to buy. Looking forward, I think there’s obviously some projects like deepening and extending the life of mines, which are good projects to pursue. And then we have two greenfields projects. The expansion of Kalgold [an open-pit operation in North West], I think there’s a real possibility that we can do that. And then Target North, where we’ve drilled and we are excited about the results so far … but we still need to do a bit more work. But I think we’ve got exciting stuff. Obviously we are also interested in looking at assets in other parts of the world and Wafi-Golpu [in Papua New Guinea] is a good example. That’s a tier one asset in our portfolio. So certainly something that’s worth developing, if we get the special mining lease resolved.

Cash-flush miner to self-finance several projects, including the Saaiplaats project that will extend life of Moab Khotsong mine by 24 years
Companies
4 weeks ago

The miner says it wants to reduce its reliance on Eskom as well as reduce carbon emissions.
Companies
4 weeks ago

Gold bides its time as investors await US jobs data

Chris Griffith: holding his feet to the fire

Gold bides its time as investors await US jobs data

Chris Griffith: holding his feet to the fire