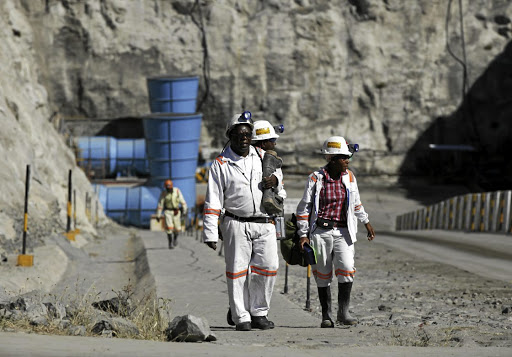 Workers return from a shift at Zimplats’s Ngwarati mine. Picture: REUTERS

The Zimbabwe Energy Regulatory Authority said Zimplats, the biggest platinum group metals producer in Zimbabwe, applied to build a 105MW plant at Ngezi, southwest of Harare, where it has mines and two concentrators, and 80MW at nearby Selous where there is a smelter and concentrator.

Zimbabwe has experienced acute rolling power cuts in the past, the latest in 2019 that lasted up to 18 hours a day, which affected the mining sector, the country’s biggest earner of foreign currency.

The government expects 100MW of electricity to come from new renewable energy projects by the end of this year and other mining companies are also planning to produce power from solar energy.

Zimplats’s plans follow those of platinum miners in SA, which are also ramping up plans to build renewable energy plants to free them from power outages that have also plagued the country for more than a decade, as well as to reduce their carbon footprint.

Sibanye-Stillwater, the leading platinum miner, Implats  and Anglo American Platinum have said they plan to scale up solar and wind farms for their own use to cut reliance on state-owned utility Eskom, some of whose ageing coal-fired plants have failed to keep up with electricity demand.

SA has been dogged by power outages since 2005 and rolling blackouts are a big problem for the world’s deepest mines, which are often forced to reduce some operations when power is rationed.

By using more renewables, the miners may also ease pressure from investors wary of carbon-intensive industries as the shift from fossil fuels accelerates.

“Eskom has a shortfall, they can’t supply the necessary energy at the moment,” James Wellsted, a Sibanye spokesperson, said in an interview last week.

“We are reliant on Eskom and its coal-fired power, so our greenhouse gas-emission levels are high relative to our peers and these are part of the steps to get to carbon neutrality.”

Sibanye has approved plans to build a 50MW solar plant to provide power to its gold mines. It is also assessing plans for a 175MW facility at its Rustenburg platinum mines and for additional supplies to come from a 250MW wind farm, Wellsted said.

The company will outline construction timelines at its half-year results next month.

Anglo Platinum aims to start generating from the end of 2023 about 100MW of renewable power at Mogalakwena, or about a quarter of the daytime electricity demand of the world’s biggest palladium mine, said Jana Marais, a spokesperson for the miner.

The company is also mulling the addition of 220MW of solar capacity for a proposed hydrogen-powered haul-truck project.

While the mines cannot run solely on renewables, the alternative energy would help improve the company’s green credentials.

“All investors want to understand is what are you doing to decarbonise and to become a more sustainable business,” said Johan Theron, a spokesperson for Implats. “It’s a concern about the future and whether everybody is doing their bit. If we do nothing and we continue to use coal power like we use today, then in 10 to 20 years we will have a problem.” With Bloomberg

Miner is reviewing its petroleum business and considering options including a trade sale, sources say
Companies
4 months ago