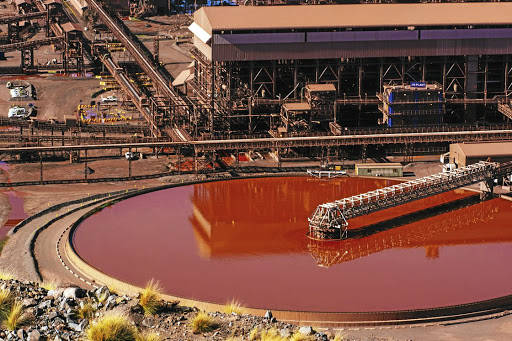 On a tear: The iron ore processing plant at Sishen. Picture: Bloomberg/Waldo Swiegers

Despite a few ups and down, iron ore prices remain at levels that defy belief and, with a supply deficit expected to persist for the foreseeable future, there appears to be no end in sight.

The bulk product, a critical component in steel making, has in 2021 seen a spectacular price rise to beyond $220 a tonne from $80 a tonne a year ago. In recent days its softened to $190 after China threatened to crack down on price gouging in the market.

Sky-high prices have been good news for companies such as BHP and Anglo American whose buoyant share prices have helped lift the JSE all share.

Kumba Iron Ore, which has seen a large earnings bump, has rewarded shareholders with sizeable dividends. Investors in Exxaro Resources and Afrimat are enjoying healthy returns thanks to these companies’ relatively small investments in iron ore.

For SA too, which produces 3% of global iron ore, these exports are proving to be major foreign exchange earner, accounting for R10.7bn of SA’s R75bn worth of mineral sales in March, according to Stats SA. It will also benefit the state’s tax coffers amid dismal economic growth.

While history dictates that high commodity prices will come down eventually, strong Chinese demand and a US infrastructure build in the offing, paired with almost no new ore supply coming on stream — prices look set to remain stronger for longer.

This iron ore price cycle for now appears to be different to the others, when rampant oversupply saw prices fall to unsustainable lows.

Mike Townshend, portfolio manager at Foord Asset Management, says when the last super cycle began in the late 1990s, producers struggled to increase output to match an unprecedented growth in demand, despite the incentive of extraordinarily high prices.

However, “the adage that the ‘cure for high prices, is high prices’ then proved true as producers invested heavily to increase commodity output. At the same time, Chinese growth slowed from heady double-digit rates to more modest growth rates, with less emphasis on infrastructure development and more focus on the consumer.”

This time around, it’s somewhat different.

As a result the hallmarks of genuine physical tightness are evident.

As Peter Hannah, index manager at Fastmarkets, notes, iron ore producers have tailored their supply plans based on anticipations of Chinese crude steel production reaching the 1-billion tonnes a year mark by 2025 at the earliest. Not only was that level exceeded a full five years sooner in 2020, but various production issues meant that iron ore supply undershot projections.

According to Erik Hedborg, principal analyst at CRU, a business intelligence company, the supply crunch can largely be attributed to Brazil, the world’s second largest iron ore mining country after Australia, which has not produced according to plan.

“The 2019 dam accident in Brazil [when a tailings dam failed, killing 270 people] is still being felt in the market as [mining company] Vale had plans to produce around 400m tonnes a year by now, but in 2020 the company produced just over 300-million tonnes, so there is nearly 100-million tonnes missing in the market from Vale.”

There are a few projects in the pipeline that will come online in the next few years, but the volumes will be limited, Hedborg says.

With Vale expected to recover its lost production, miners are cautious about investing in new production for fear of new volumes to enter the market just as Vale’s supply starts ramping up again, which would quickly put pressure on iron ore prices.

“In the coming years, we only see modest supply increases from [the world’s largest iron ore producing companies] simply because there is not enough spare capacity in their systems,” says Hedborg, adding that though there are some new mines that have recently started producing or will deliver the first ore in the coming year, these are replacement projects and will not result in increased production from the majors.

Hannah expects there could be a supply response which sees lower grades coming into the market to take advantage of sky-high prices. “What was once waste will now be considered ore,” he says. “There will be great incentives for any players with available capacity to reduce cut-off grades to increase volumes.”

And while iron ore projects like Simandou in Guinea may bring more high-grade ore to market later in the decade, a near-term rebalancing is likely to be driven more by juniors rapidly advancing relatively low-grade, short lead-time projects, says Hannah.

While on the supply side there appears every reason for strong prices to persist, on the demand side China may be looking to tackle excessive pricing but demand is expected to remain robust while other steel markets are anticipated to recover too.

This is what is driving SA’s current account surplus

In SA’s case, it is due to a collapse in consumer demand that has resulted in lower imports, coupled with a big increase in the price of the ...
Opinion
1 month ago

WATCH: Is the rebound in mining production sustainable?

WATCH: Is the rebound in mining production sustainable?