The billionaire empire-builder will hand the reins to another South African, Gary Nagle 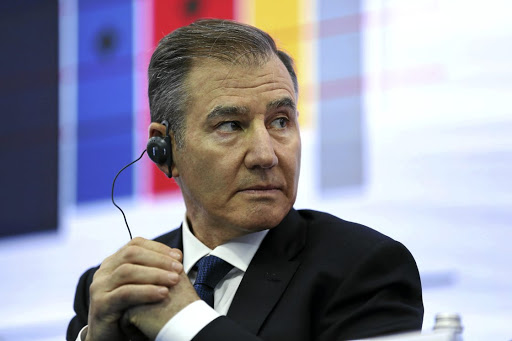 London — Ivan Glasenberg, a former coal trader who became the billionaire boss of Glencore, will step down as the commodities behemoth navigates through corruption probes, scrutiny of its environmental bona fides and a share price that’s lost half its value during the past decade.

The CEO will relinquish his position within the next six months, he told investors on Friday. He’ll be replaced by fellow South African Gary Nagle, who now oversees the company’s coal assets. Glencore’s London-listed shares rose.

The relentless Glasenberg took over as CEO in 2002 and became synonymous with the world’s biggest trader in coal, nickel, oil and agriculture. During his first nine years, the closely held company rode the Chinese-fueled commodity boom that sent demand for raw materials, and their prices, to unprecedented levels.

That surge encouraged him to take the company public in a £36.7bn listing in London, providing the cash for a breakneck spree of deals that reshaped the industry. It bought Xstrata in a $90bn deal, becoming the world’s biggest coal shipper in the process. Glasenberg has a net worth estimated at about $4.3bn, according to the Bloomberg billionaires index.

“Ivan will be missed,” said Ben Davis, a mining analyst at Liberum Capital in London. “Far more capable of straight-talking than most CEOs, and it was always enjoyable to hear him cut through the illogical strategies of his peers.”

Glencore’s troubles started in July 2018, when the company announced it was being investigated by the US department of justice for possible money laundering and corruption. Similar probes followed in Brazil, the UK and Switzerland, where Glencore is based and Glasenberg lives.

At the core are Glencore’s operations in the Democratic Republic of the Congo and its deals with Israeli billionaire Dan Gertler, who was sanctioned by US authorities for alleged corruption.

The investigations sucked investor faith out of Glencore. The company subsequently lost more than half its value, prompting the first serious questions about whether Glasenberg was the right person to right the ship. Those doubts were compounded as more institutional investors soured on the company’s giant thermal coal operations because of their greenhouse gas emissions.

To help allay those concerns, Glencore said on Friday it’s seeking to be a net-zero emissions company by 2050. That implies the company will be largely coal-free by then as its runs down the life of its current mines — even as it names a coal-business veteran to be the new CEO.

Glasenberg was born in 1957 and grew up near Johannesburg, the son of a Lithuanian immigrant who imported and distributed luggage. He was a high-school athlete and became a national champion in race-walking. He graduated in 1981 from Wits University with an accounting degree and earned his MBA two years later at the University of Southern California.

He learnt the commodities trade at Marc Rich, the eponymous firm founded in 1974 by the man celebrated for inventing the spot-oil market. Rich later spent 17 years evading US justice after making oil deals with Iran during the hostage crisis of 1979-1981. He was pardoned by president Bill Clinton in 2001.

Glasenberg was part of a management buyout from Rich in 1994 that saw the company renamed Glencore. Working under then-CEO Willy Strothotte, Glasenberg was instrumental in a strategy of buying the mines, smelters and refineries that produced the commodities it traded, helping separate the company from its major rivals.

Glasenberg succeeded Strothotte in 2002, just as China embarked on a decade of economic expansion and infrastructure build-out that would make it the largest user of metals — and Glencore’s biggest customer. The company’s global dealing in commodities enriched its owners, including Glasenberg, but the global financial crisis in 2008 forced change. Glencore’s reliance on bank leverage rather than shareholder equity left it exposed, while the company grew too big to be able to pay out its owners when they wanted to leave.

That helped prompt Glencore to go public in 2011 just as commodity prices were hitting record highs. The promise of its black-box trading operation, which distinguished it from pure mining competitors, lured investors to pay 530p a share.

During the next four years, the company evolved from disrupting the world of commodity trading to taking on the world’s biggest miners. Glasenberg implemented an empire-building strategy that scooped up mines across the globe. The Xstrata deal, a pursuit of Rio Tinto Group and analyst speculation about a possible bid for Anglo American Plc created an industry frenzy.

The Xstrata takeover made Glencore the biggest coal shipper, while also spotlighting Glasenberg’s ruthless side. Mining grandee Mick Davis, who’d built Xstrata from a debt-laden miner into a $50bn powerhouse, was poised to become CEO of the combined company, but shareholders revolted over payments he was set to receive.

He was ousted, and Glasenberg took the top job. Davis has called that situation his lowest professional point.

Missing out on iron ore has hurt Glencore for years, with the company now dwarfed in value by Rio. That slump in Glencore’s value, especially compared with its rivals, led Glasenberg to say on Friday that he won’t play any role in the mining industry after retiring. Still, the company dominates the commodity supply chain as the biggest trader of cobalt, nickel and coal, and second-biggest of copper.

Glasenberg’s chief lieutenants, who themselves became billionaires when the company listed, have been leaving for the past two years. The exodus included former head of copper trading Telis Mistakidis, head of oil Alex Beard and Daniel Maté, who headed up its zinc business.

Though Glasenberg is retiring, in many ways Glencore will remain under his influence. He holds a 9.1% stake in the company, making him its second-biggest shareholder.

“I have no intention of selling my shares, and I have full confidence in Gary to look after my investment,” he said in an interview minutes after announcing he was stepping down.

Mining’s biggest jobs are up for grabs. Here are the contenders

There’s a changing of the guard in the mining world, with some outgoing chiefs even dictating the age of their successors
Companies
2 years ago

The head of copper marketing,  billionaire Telis Mistakidis, retires at the end of the year
Companies
2 years ago

The country says Glencore is to shut its copper mines, a move that will be blocked by the government as it affects jobs
Companies
1 year ago

The three men likely to take over Glencore when Glasenberg goes

The three men likely to take over Glencore when Glasenberg goes