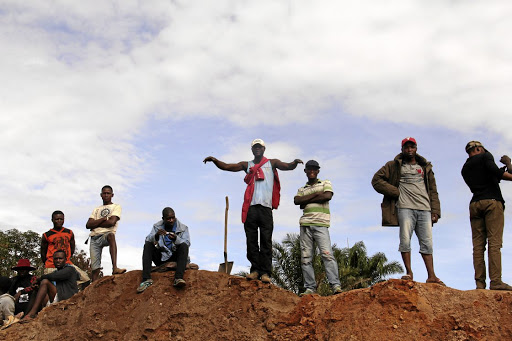 Artisanal miners wait to start digging for cobalt in a freshly excavated pit in Kasulo township in Kolwezi, in DRC. Picture: BLOOMBERG

London — Glencore, the top cobalt producer, backed a new initiative to support informal miners in Democratic Republic of Congo (DRC) as the industry tries to reassure carmakers about ethically mined supplies of the battery metal.

The company, which has long argued that the vehicles industry is best served by buying cobalt from its industrial mines rather than from informal miners, said Monday that it has joined the Fair Cobalt Alliance. The group aims to end the use of child labour at mining sites and improve working conditions in DRC. It’s also backed by major Chinese cobalt refiner, Zhejiang Huayou Cobalt Co.

Glencore is joining the FCA at an important time for the cobalt industry. Earlier in 2020, Tesla agreed to buy the metal from Glencore’s DRC mines as it seeks to avoid a future supply squeeze, yet battery makers are increasingly looking to engineer out the metal given it’s high price and concentrated output in one country.

“The FCA is a vehicle for businesses all along the supply chain to collaborate with the DRC government and civil society to transform the artisanal mining sector into a source of fair, safe and responsibly mined cobalt,” said David Brocas, Glencore’s head cobalt trader.

Almost three quarters of the world’s cobalt comes from DRC, where Glencore owns two of the largest mines, and demand is forecast to surge in the coming years, driven by electric-vehicle sales. Still, groups such as the Organisation for Economic Co-operation and Development have warned about the risks from the informal sector, where independent miners dig by hand and production from DRC’s artisanal mines often gets mixed in with industrial output.

Glencore has long positioned itself as the leading source of responsibly mined cobalt. It already has supply deals with China’s GEM Co and BMW and, unlike some rivals, has avoided buying from artisanal supply. The company has no current plans to change that policy.

Artisanal gold mining is on the rise, and abuses along with it

While the West wants ethically sourced gold, some parts of the world have no such qualms about trading in gold mined under poor conditions
World
1 year ago
Next Article