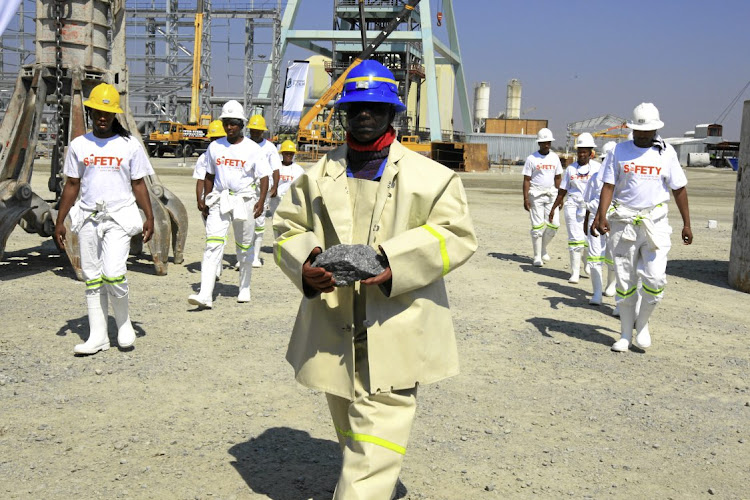 Workers at RBPlat’s Styldrift Mine in North West celebrate the intersection of the Merensky Reef 600m below the surface. Picture: KATHERINE MUICK-MERE

Royal Bafokeng Platinum (RBPlat) will record a strong interim financial rebound despite a hefty blow to its production in the first half of the year as SA’s economy was shut down at the end of March.

RBPlat, which is 40% owned by a North West province community investment holding company, Royal Bafokeng Holdings, said its production of platinum, palladium, rhodium and gold at its two mining operations fell by 13% in the six months to end-June compared to 2019.

“The managed shutdown and subsequent ramp up of our operations as a result of the national lockdown resulted in an effective loss of about 45 days of production,” RBPlat said.

RBPlat owns the Bafokeng Rasimone Platinum Mine and is ramping up its new Styldrift mine to steady state production.

The weakening of the rand meant Amplats received an 80% higher rand price for the basket of metals it mined.

RBPlat anticipates earnings per share of 330c to 344c compared to a 70.8c loss the year before.

Headline earnings, which strip out one-off items to give a like-for-like set of numbers for investors to consider, will be 327.3c to 341.3c per share against a 70.8c loss.

RBPlat will publish its interim results on August 4.

RBPlat withdraws guidance and cuts capital expenditure due to Covid-19

The world number two PGMs miner sees no disruptions to spares to fix broken plants that have taken 900,000oz of metals out of the market
Companies
1 year ago

The miner is likely to conclude a deal to exit one of its shafts before the end of the year, and is looking for a possible acquisition
Companies
1 year ago
Next Article