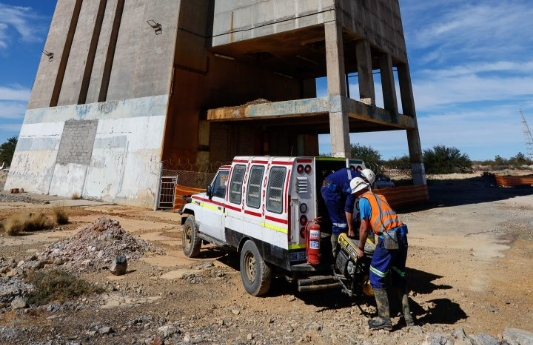 Prieska headgear that Orion Minerals is hoping to bring back into production by 2021. Picture: SUPPLIED

Orion Minerals, which is restarting the Prieska zinc and copper mine, raised $5.5m in a placement of shares and has broadened the rights offering to raise a further $2m.

Orion will use the money towards completing the optimisation work of its bankable prefeasibility study, which is the document it can take to financiers to raise capital to fund the project, as well as start early-stage work at Prieska in the Northern Cape.

Orion will extend the placement offering to smaller shareholders on its register. The share purchase plan will open at the end of October and run for a month until November 29. It will raise up to $2m in this scheme.

Smaller shareholders can buy parcels of shares in packages between $2,000 and $30,000 in value. These shares will cost $0.025 each, which Orion said represented a 7.4% discount to the volume weighted average price over the past five days.

The raising of the capital would allow Orion to take talks on financing the project to the next stage and clear the way to start preparing contracts, said Orion chair Denis Waddell.

“Optimisation study work is producing very positive early indications for a potential reduction in project capital and the possibility of bringing production forward,” he said.

Orion plans to restart the Prieska mine, which was stopped in the early 1990s, using the existing shaft and underground infrastructure to extract the large resource Anglovaal left behind after 20 years of mining. Orion has a mining right.

The bankable study shows a need for peak funding of R3.8bn to deliver a mine that will produce 22,000 tonnes of copper and 70,000 tonnes of zinc annually in the first decade. Post-tax free cash flow is estimated at R8bn and a payback period of three years.

Orion, which is listed in Sydney and Johannesburg, said on Thursday it had agreed with “sophisticated and professional investors” to place 222-million shares to raise the $5.5m.

One of Orion’s major shareholders, Tembo Capital Mining, which holds a 24% stake in the company, subscribed for $2.5m of the placement, which will be completed at the end of October.

To bring the mine into production, Orion has to pump water out of the flooded shaft and underground workings, and refurbish the shaft.

The carbon tax can be seen as just another source of revenue for a government that has squandered billions in corruption, theft and incompetence
Companies
1 year ago

By fast tracking new large solar projects, Eskom will have the space to revisit its operational performance and reset its base
Companies
1 year ago

Safika acquires 9% stake in Prieska copper and zinc mine