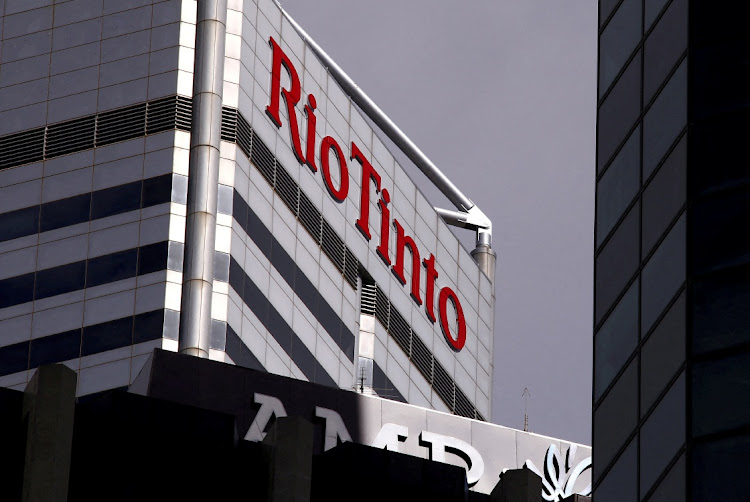 A sign adorns the building where mining company Rio Tinto has their office in Perth, Western Australia, in this November 19 2015 file photo. Picture: REUTERS/DAVID GRAY

The stellar results cap a mixed year for the world’s biggest iron ore producer, during which demand for its mainstay product — iron ore — picked up with the global economy slowly recovering from the coronavirus pandemic but inflation and Chinese scrutiny on prices created headwinds.

Rio’s reputation suffered as it was caught in a scandal about poor workplace culture and, more recently, Serbia shut down a lithium project, a promising growth area. On the plus side, it resolved a long-running dispute over a massive Mongolian copper-gold mining project.

“Our balance sheet is the strongest it’s been for at least 15 years,” Rio Tinto CEO Jakob Stausholm told reporters in a news conference after the results were announced.

The company’s shares closed 1.2% higher on the Australian Stock Exchange ahead of the results.

“Rio Tinto remains a company in solid financial shape, and though facing higher costs like the rest of the industry we would expect the operations to post a better 2022,” RBC Capital said in a note.

“We continue to see potential that Rio Tinto uses its strong balance sheet to pursue inorganic M&A through 2022,” it said.

China, which accounts for more than half of Rio’s revenue, said on Wednesday that it will prevent “excessive hoarding” of iron ore, a move that analysts have said could affect the industry, though details of how this would be implemented are still unclear.

Stausholm declined to comment on this saying nothing officially has been communicated on it yet.

Rio said in its results statement that it is committed to exploring all options in Serbia, which shut down its $2.4bn Jadar lithium project, and was “reviewing the legal basis of the decision” and the implications for the company’s activities in Serbia.

“Ultimately, it is for the government of Serbia to decide whether they want to see this opportunity happening. Right now what we are offering is to have meaningful engagement with stakeholders,” the CEO told reporters.

Stausholm took over the top job in the wake of a widespread backlash against the company after it blasted the 46,000-year-old Juukan Gorge rock shelters to expand an iron ore mine.

An external review of the miner’s workplace culture released earlier this month outlined a culture of bullying, harassment and racism, including 21 complaints of actual or attempted rape or sexual assault over the past five years.

“We have become more humble and better listeners, both internally and externally as we extract the full learning from Juukan Gorge,” Stausholm said.

CLYDE RUSSELL: Can Rio Tinto be one of the ‘good guys’?