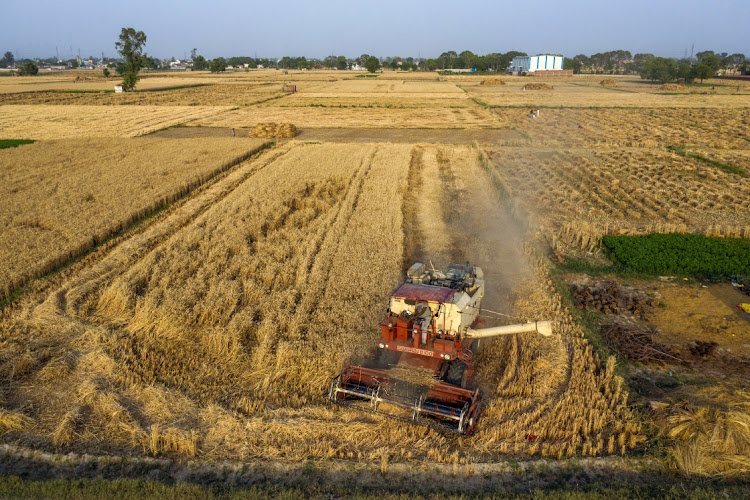 A combine harvester cuts wheat during the harvesting of a field. Picture: BLOOMBERG/PRASHANTH VISHWANATHAN

Zeder investments, part of the PSG Group stable founded by Jannie Mouton, said on Thursday that a climatic cycle continues to favour its portfolio of mostly agribusinesses, signalling that the group started the 2022 financial year on a positive footing.

In an operational update, the investment group said it had made substantial progress in assessing several offers from third parties, which are vying for a share of Zeder’s portfolio as part of the shift in strategy that was announced earlier this year.

CEO Johann le Roux has previously said there was no timeline attached to talks aimed at selling some assets with the objective of narrowing the discount of just under 30% between the value of Zeder’s underlying portfolio and the share price.

The investee companies that could be targeted include Zaad, which develops and distributes a broad range of seeds and chemicals in Africa, Europe and other overseas markets. Zeder also own 96% of Capespan Group, which produces and procures an assortment of fruit, as well as its logistics business.

“The underlying agriculture sector has done remarkably well. The only asset inside Zeder which been completely useless … [is the] Zambian commercial farming business called Agrivision, which at one point in its illustrious history was worth R620m and has since been slashed in value, losing Zeder shareholders nearly half a billion rand in value over the last few years,” said Anthony Clark, small-medium cap analyst at Smalltalkdaily Research. 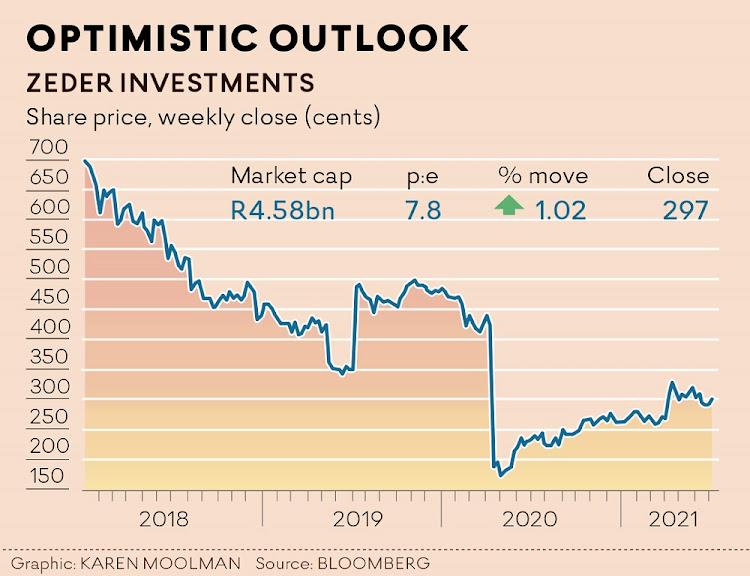 “At the end of the day, the current discount of just under 30% is a little higher than it has been in the last few months. All now rests on the cautionaries. I have gone on public record stating the two assets, which I think will attract significant interest, would be the logistics group, which has the ports in Durban and Cape Town, along the farming interest of Capespan — both have been heavily restructured and are far more saleable businesses.”

Zeder’s agribusinesses produce a range of inputs such as seeds and crop protection chemicals and the demand for these products is tied to weather patterns which are highly cyclical and unpredictable.

However, SA had above-average rainfall in the 2020/2021 production season, leading to the second highest maize production on record.

“The prospects for most of Zeder’s investee companies are promising in the short term, given the favourable climatical factors. We are committed to creating shareholder value,” the company said in a statement.

However, Zeder’s sum-of-the-parts value per share dropped to R4.25 as of Wednesday, from R4.33 in February, mainly as a result of the 20c per share special dividend paid in May and the resultant lower cash balance.

The sum-of-parts is the accounting term used to evaluate each of the businesses within the portfolio separately and then add them together to get the total value of the company.

What next for PSG’s Zeder?

The sale of its Pioneer Foods stakes has put Zeder on the road to being wound up, or making good on its last assets
Money & Investing
1 year ago

Food sector: Some M&A spice on the menu?

Deals have been bubbling away among the JSE’s smaller food groups, but some big-ticket moves may be on the cards
Money & Investing
1 year ago