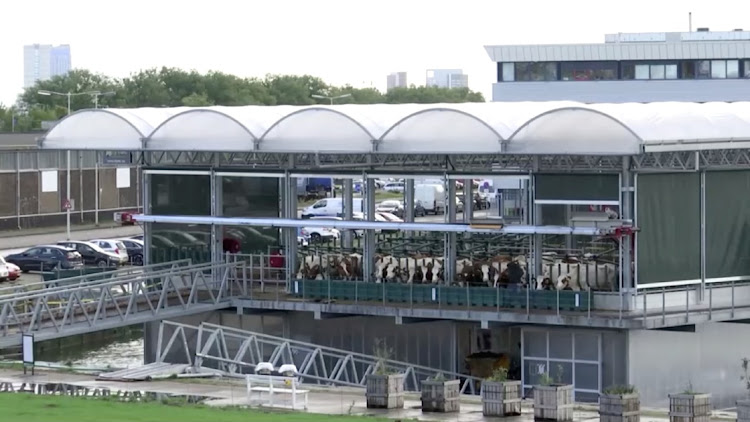 Rotterdam — Dutch businessperson Minke van Wingerden looks on proudly as one of her 32 brown-and-white cows makes a pit stop at an automated milking station on an unusual farm: a platform located on one of the waterways in Rotterdam port.

Van Wingerden is one of the developers of the “Floating Farm”, testing whether small-scale, sustainable dairy farming is feasible in the heart of one of the world’s most urban, industrial areas — far away from rolling green fields of a traditional agribusiness.

“This idea started in 2012. My partner Peter, he was involved in a project in New York, and then Hurricane Sandy hit New York very badly, so it was flooded and after two days there was no fresh food on the shelves anymore because the logistics hub was also flooded,” she said.

“So then we realised ‘why not produce fresh food, healthy food on the water close to the city?’, and that’s where the idea came up.”

The cows, seemingly unperturbed by their futuristic setting on the fringe of Europe’s largest and busiest port, can rest on the upper level of the structure or head to a feeding station for a mix of hay, grass clippings and beer byproducts.

Milk and manure processing facilities are located on the lower deck, as well as the visitors’ entrance and store. A quayside pasture gives the animals the chance to be on dry land.

The structure’s roof is used to collect rainwater. Power for the farm comes from a solar panel array floating nearby.

“The amount of arable land is decreasing and the world population is growing, so how can we produce enough healthy food in the future?,” Van Wingerden asked. “Seventy percent of the world is water, so why not use the water to produce fresh healthy food near to the consumers?”

Close to the town of Schiedam, the farm is located in one channel of the “Merwehaven”, a harbour within the sprawling 105km² port, which handles containers ships from all over the world.

The whole farm site is kitted out with the latest in dairy tech, such as an automated feeding system, manure-scooping robots, self-serve cleaning stations, and the smartphone app on-site farmer Albert Boersen uses to monitor his cows.

“We try to be as circular as can be and it’s still a [matter of] research how we can find out more circles in this farm,” Van Wingerden says.

As part of its aim to be self-sustainable, the farm already has a manure separator used to separate dry material from urine, with the dry part used as bedding for the cows and the urine turned into an organic fertiliser.

It sells some bottles of raw milk on-site to visitors, while the rest is pasteurised and turned into milk or yoghurt. It is sold to customers who live nearby via an online grocer, Picnic, known for its small, electric delivery vans.

Rotterdam with its highly rated cuisine and culture has astounding buildings.
Life
2 years ago

KARYN MAUGHAN: Black farmer wins big in court, but is too afraid to go back to his land

In the past few months, global fertiliser prices fell notably, partly due to a supply glut — and the input price of fuel
Opinion
1 year ago
Next Article

WANDILE SIHLOBO: A sleeping giant: the Eastern Cape and its agriculture

Everyone wants to farm cannabis, even North Macedonia

WANDILE SIHLOBO: A sleeping giant: the Eastern Cape and its agriculture

Everyone wants to farm cannabis, even North Macedonia