Cash in on cannabis 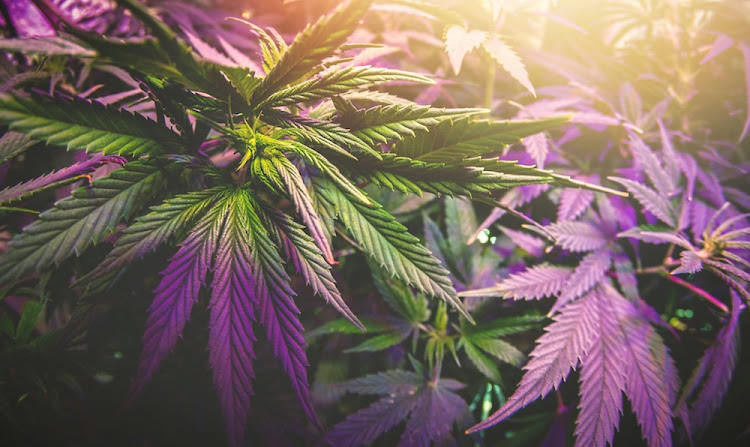 Estimated at about $30bn, the global legal cannabis market is expected to reach between $75bn and $100bn by 2030. Picture: SUPPLIED/SILVERLEAF INVESTMENTS

The world is in the grip of a cannabis rush. Research-based recognition of the plant’s seemingly infinite medical and industrial applications is fuelling a legalisation rethink across most of the globe. And such developments are bringing to an end decades of prohibition and stigma, paving the way for exponential market expansion and industry growth. With both product diversification and sophistication on the rise, the cannabis plant’s disruptive potential seems unlimited.

More than 30 countries have now legalised medical cannabis. Geneva Business News reports that an estimated 1.2-billion people worldwide suffer from medical conditions “for which cannabis has shown to be of therapeutic value”. We expect that by 2024, the burgeoning international medicinal cannabis market alone could be worth $60bn.

In SA, legislation on the cultivation of cannabis for medical use was passed in 2018 and allowed under licence from SA Health Products Regulatory Authority (Sahpra), but remains expensive and complicated. Cultivation for personal adult usage is permitted in terms of a Constitutional Court ruling in 2016 but the sale of cannabis remains prohibited.

Cannabis’s non-psychoactive compound CBD (or cannabidiol) has enjoyed a recent rise in popularity. CBD lacks the “getting stoned” component brought about by THC (tetrahydrocannabinol). Some describe it as the decaf version of cannabis, providing many of the benefits without the buzz.

The absence of psychoactive effects means that CBD is most commonly used for medical purposes. It has been shown to have anti-inflammatory and anti-anxiety benefits and is a known reliever of insomnia, spasms and seizures. According to Grand View Research, there is “growing adoption of cannabis as a pharmaceutical product for treating severe medical conditions, such as cancer, arthritis, Parkinson’s disease, and Alzheimer’s disease among other neurological conditions”.

Since the World Health Organisation recommended taking CBD off the banned substances lists, legislation has shifted widely and the markets have followed.

In SA, Distell recently bought into a local CBD range of products, and there have been a number of cannabis company buyouts by large US food and beverage companies.

Hemp is used in an exhaustive list from foods to medicines, bio-composites to clothing and textiles, as well as paper substitutes and packaging, biofuel, health products, and cosmetics. Fast-growing, it thrives on little water and is known as a “mop-crop”, one that is able to purify contaminated soil. Growing hemp generates little waste, which is also entirely biodegradable.

In SA, the widespread, legal cultivation of hemp is just beginning. Hemp cultivated for industrial use, as well as for CBD extraction, will fuel explosive growth in the coming months.

Estimated at $30bn, the global legal cannabis market is expected to reach between $75bn and $100bn by 2030. This is a formidable figure in anyone’s books, especially for an industry fresh out of the starting gates, long sequestered behind a firewall of prohibition. 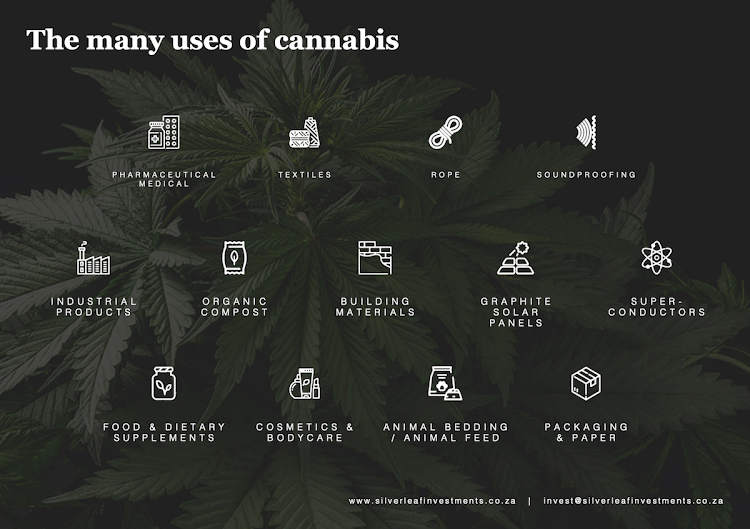 The many uses of cannabis. Picture: SUPPLIED/SILVERLEAF INVESTMENTS.

“The Global Cannabis Report” recognises the pace with which cannabis stocks are becoming mainstream in places such as the US and Canada. However, it also highlights that Africa is in dire need of investment to take advantage of rising global demand, reporting that Africa lacks “the infrastructure and facilities necessary for cannabis production”.

But SilverLeaf Investment Fund remains optimistic about the role  cannabis can play in addressing job creation and rural economic development in SA. With a conducive cannabis-growing climate, we believe in its potential to become a powerhouse green economy once the unregulated market is formalised.

The industry is also strongly aligned with the government’s strategic development priorities, including growth within the agricultural and agri-processing sectors that can lead to foreign exchange earnings through export. And, at all levels, there is tremendous room for job creation, community involvement and skills development, all of which have knock-on effects for economic transformation, rural economic development and general economic growth.

For investors, it’s not a time to procrastinate. Once the industry “normalises”, returns will also normalise. As a section 12J investment fund, SilverLeaf Investments provides an entry point for investors with a minimum investment of R50,000 and offering a 100% tax deduction in the year the investment is made.

Partnered with Jeff Miller and Malcolm Segal’s Grovest, a trusted boutique investment firm and SA’s first and largest section 12J fund administrator, its targeted internal rate of return is between 20% and 30% over five to seven years.

If green is the new gold, there has never been a better time to get involved.

About the author: Pierre van der Hoven is joint CEO of SilverLeaf Investments.

This article was paid for by Silverleaf Investments.