Barloworld shares soared as much as 10% on Monday, the most since late September, after the diversified industrial group rewarded shareholders with a payout equivalent to a 10th of its market value. This was after earnings recovered strongly from the Covid-19-induced setback.

CEO Dominic Sewela has overseen efforts that successfully turned around the company’s car rental business, which was previously battered by the fall off in tourism numbers as lockdown restrictions curbed travel by corporates and individuals.

With declining air travel, management repositioned its car rental business towards off-airport activities that attracted demand and longer length rentals. The size of its Avis fleet was also reduced. As a result, the car rental and leasing segment realised an operating profit of R850m in the year to end-September compared with R302m a year before.

Barloworld’s equipment businesses in Southern Africa and Eurasia also contributed to the recovery in financial results, as did its starch business. The equipment businesses benefited from a surge in demand for commodities such as coal, which is used in the generation of electricity. The demand came from China in particular, which was gripped by coal shortages during the review period. 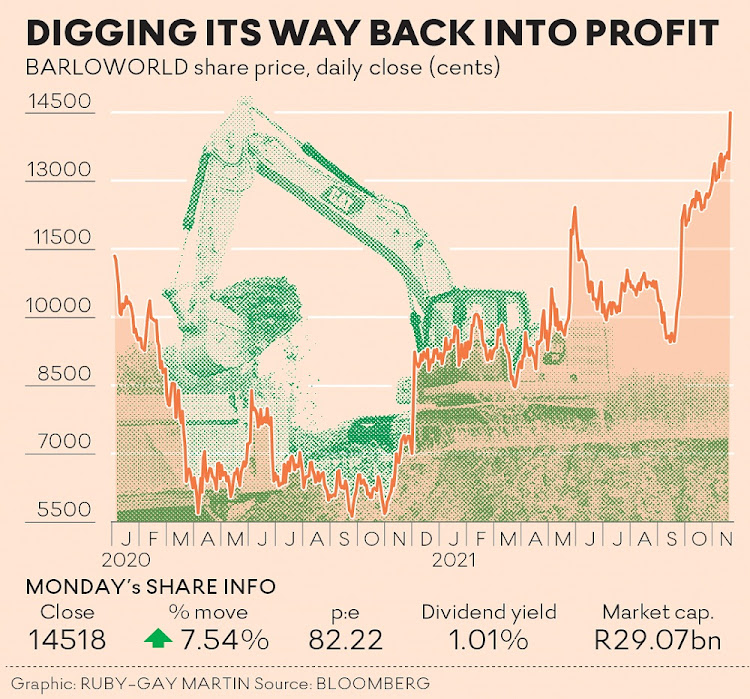 Barloworld declared a special dividend of R11.50 per share, topping up an ordinary dividend of R3 per share in the year to end-September, after none was declared a year ago as the company erred on the side of caution while the pandemic played out. The two dividends total R2.9bn.

Diversified industrial group Barloworld has bounced back during its 2021 financial year. The group has swung to headline earnings per share of R11.95 versus a headline loss per share of R2.86 a year ago.

Group headline earnings per share were R11.95 vs a headline loss of R2.86 a year ago.

“Our results have benefited from the acquisitive growth provided by Equipment Mongolia and Ingrain, the exceptional performance from the southern African and Russian equipment businesses, and the impressive turnaround of the car rental business,” Sewela said.

A year ago it acquired the starch business from Tongaat Hulett, which it rebranded Ingrain. Earlier in 2020 it also acquired the Mongolian business, which sells and distributes mining and construction equipment, among other services.

Update: November 22 2021
The article has been updated with new information and the closing share price.

The sale is an ‘important milestone in the pivoting of the portfolio towards defensive, relatively asset-light and cash-generative industrial ...
Companies
11 months ago