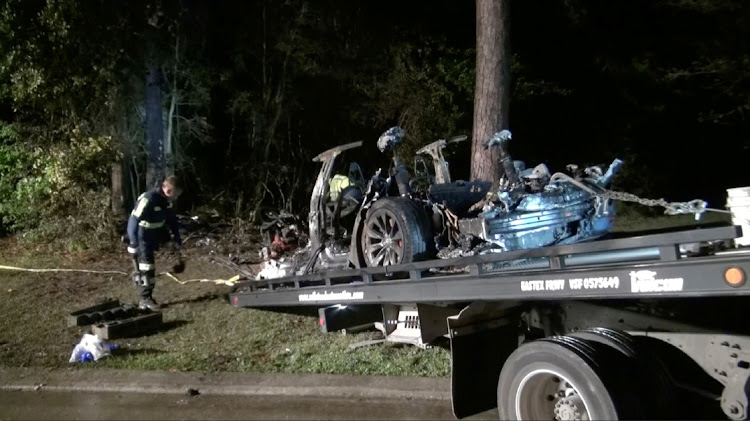 The remains of a Tesla vehicle after it crashed in Houston, Texas, April 17 2021. Picture: SCOTT J ENGLE/REUTERS

Houston — Two US agencies have launched probes into the fatal crash of a Tesla Model S in Houston, Texas, late on Saturday that killed two people.

The two male occupants, who have yet to be identified, were in the car but no-one was behind the wheel, according to local authorities. Both died in the crash that occurred late on Saturday. The vehicle, which had travelled a short distance, hit a tree and burst into flames that took hours to extinguish.

The US National Transportation Safety Board (NTSB) announced on Monday that it planned to join the investigation. Its officials will focus on “the vehicle’s operation and the post-crash fire”, the agency said in a posting on Twitter.

A team is expected to arrive in the area later Monday. The agency had earlier said it had no plans to investigate.

The National Highway Transportation Safety Administration is also reviewing the accident and said in a statement that it’s “actively engaged with local law enforcement and Tesla to learn more about the details of the crash and will take appropriate steps when we have more information”.

The crash occurred at 11.25pm on Saturday in Houston. It was not immediately known if Autopilot, Tesla’s name for its driver assistance feature, was engaged at the time of the crash, which occurred in a suburban neighbourhood. Autopilot is primarily designed for highway driving. Tesla, which collects large quantities of data about its cars, did not respond to a request for comment.

“We’re drawing up search warrants for the vehicle,” said county constable Mark Herman in a telephone interview on Monday. “The car travelled a very short distance.”

The fatalities come at a critical time for Tesla, which has rolled out a feature it markets as “full self-driving” to scores of customers that are beta testing the technology in advance of a wider release.

CEO Elon Musk recently tweeted that improvements are being made to the vision stack each week, and the company has plans to roll out a subscription service. Tesla reports first quarter earnings next week.

Lithium-based batteries are highly flammable and difficult to extinguish. Once damaged, they can also reignite hours or days after being doused, the safety board has warned. The NTSB has warned about the dangers of battery fires from electric cars for years.

In January, the NTSB issued a special report on the dangers, saying manufacturers have left emergency responders vulnerable to battery blazes. The NTSB issued four recommendations, calling on federal regulators to help create standards to reduce the risks of fires and seeking better guidance from carmakers for firefighters.

The tactics for fighting battery fires is different from blazes involving other chemicals such as petrol. While most chemical fires are snuffed using foam or powder substances, the tactic for batteries is to douse them with water until they cool off. It took more than 113,562 litres of water to extinguish the Tesla blaze in Houston.

Elon Musk makes cars that don’t use fossil fuel, which Darren Woods produces, but both see a bright future
Companies
6 months ago

Company delivers 184,800 cars in the first three months of 2021 on rising demand in China
Companies
6 months ago