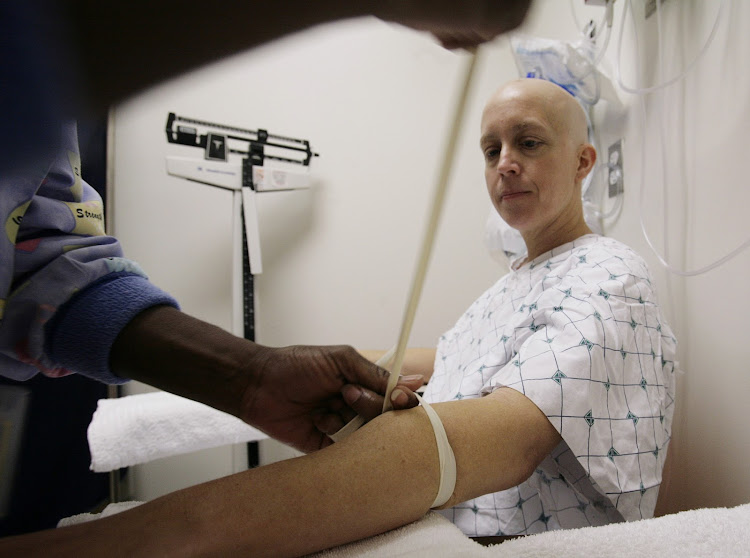 Enhertu is being evaluated for use in earlier stages of breast cancer, as well as lung and colorectal cancers. Picture: REUTERS/JIM BOURG

London — AstraZeneca and Daiichi Sankyo’s Enhertu extended survival by more than six months in patients with a form of advanced breast cancer compared to standard chemotherapy, according to data presented on Sunday.

The data, unveiled at the American Society of Clinical Oncology meeting in Chicago, could open a large, new multibillion-dollar patient population for the drug that won US approval in late 2019 as a third-line treatment for the 15% of breast cancer patients with HER2-positive disease.

The ongoing phase 3 trial involves more than 550 patients with so-called HER2-low breast cancer — most with tumours that were hormone-sensitive — whose disease had spread and had undergone at least one round of chemotherapy.

The interim analysis showed Enhertu prolonged survival by an additional 6.4 months in patients with hormone-sensitive tumours. Patients in the group lived for a median of 23.9 months vs 17.5 months for chemotherapy.

In the small group of patients with hormone-insensitive tumours, patients on Enhertu lived 6.3 months longer.

That the benefit in overall survival was apparent even at the point of interim analysis was surprising, David Fredrickson, executive vice-president of AstraZeneca’s oncology unit, told Reuters.

“That really puts a lot of confidence that the benefit that we’re seeing here is absolutely real.”

A host of targeted therapies has greatly improved the prognosis for patients with advanced HER2-positive breast cancer. But more than half of women whose breast cancer has spread to other organs and express little or no HER2 — referred to as HER2-low status — have limited treatment options.

Hormone-sensitive patients who received Enhertu also went an average of 10.1 months before their disease began to worsen — a measure known as progression free survival (PFS) — compared with 5.4 months for chemotherapy, which was statistically significant.

Enhertu more than doubled the PFS for hormone-insensitive patients at 6.6 months vs 2.9 months for chemotherapy.

AstraZeneca is in discussions with regulators globally for approval in the HER2-low population. Jefferies analysts last month forecast $2.5bn in annual global Enhertu sales for these patients, and about $6.6bn across all indications.

The drug, which is administered as an intravenous infusion, is not without safety concerns. It has been linked to a type of lung scarring called interstitial lung disease (ILD). Forty-five Enhertu patients in the trial had varying degrees of ILD versus one in the chemotherapy group.

Enhertu belongs to a class of therapies called antibody drug conjugates, which are engineered antibodies that bind to tumour cells and release cell-killing chemicals.

In May, it gained approval as a second-line treatment option after a study showed it reduced the risk of disease progression or death by 72% compared to Roche’s Kadcyla, which has been the standard treatment.

Enhertu is being evaluated for use in earlier stages of breast cancer, as well as lung and colorectal cancers, among others. It has secured approval in HER2-driven gastric cancer.

“As far as breast cancer goes, I’d say at least in the next few years, I’m pretty sure Enhertu is going to kind of finish revolutionising the treatment paradigm,” Tara Hansen, a consultant at Informa Pharma Custom Intelligence, said.

Enhertu had sales of $214m in 2021. AstraZeneca secured partial rights to the Daiichi Sankyo compound three years ago in a deal worth up to $6.9bn.