The vaccine uses the whole, inactivated virus to create an immune response, an old but proven approach 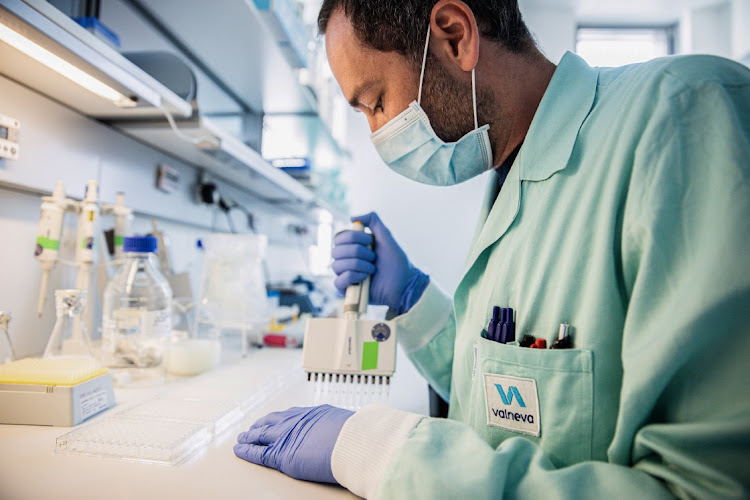 A technician at the Valneva laboratories in Vienna, Austria. Picture: BLOOMBERG/AKOS STILLER

London — Valneva plans to start final-phase trials on its Covid-19 vaccine candidate in APril after positive early-stage studies, a step forward for an old-school shot that’s backed by the UK government.

The French company said on Tuesday that a phase 1/2 test produced significant levels of antibodies in more than 90% of participants and raised no safety concerns. Valneva shares rose as much as 8.4% in Paris trading.

The vaccine uses a sample of the virus that has been killed to stimulate an immune response without causing the disease — an approach that has been used for decades with inoculations for polio and hepatitis A. The shots currently in use in the UK use novel technology to deliver instructions for cells to target portions of the virus and spur immunity.

Valneva has said the well-established safety profile of inactivated jabs may allow a successful shot to be used in a broader group of people than the newer technologies. By using the whole virus rather than tackling part of it, like the mRNA vaccines from Pfizer and Moderna, or the adenoviral vector vaccines from AstraZeneca and Johnson & Johnson, Valneva’s shot could also potentially tackle mutations better.

In the early-stage trials, which involved 153 adults aged 18 to 55, the company studied three different dosing levels given three weeks apart, with the highest dose proving the most effective. The company said on Tuesday that it is working with the UK government on the potential development and supply of variant vaccines.

The results “provide renewed hope that a vaccine using a whole, inactivated virus might provide strong protection against variants,” UK vaccines minister Nadhim Zawahi said in the statement. If the vaccine gets UK regulatory approval, “this will be another powerful weapon in our arsenal to beat this pandemic”.

Valneva’s is the only vaccine based on an inactivated virus that’s this far along in clinical trials in Europe. A shot produced by China’s Sinopharm also relies on the traditional approach.

CEO Thomas Lingelbach said in an interview in February that the company didn’t see using a placebo at this stage in the vaccine rollout as ethical, and was in discussions with the UK regulator about using another vaccine as a comparator in the trials. The company didn’t give an update on the plans Tuesday.

The UK has signed a deal worth as much as £1.4bn to receive as many as 190-million doses of the shot between 2021 and 2025. The British government is also investing in the biotech’s Scottish manufacturing plant, where the vaccine will be created.

In light of the potential plans to adapt the vaccine to variants, Valneva expects the delivery of the first 60-million doses to extend into the first quarter of 2022.

The vaccine contains an adjuvant supplied by Dynavax Technologies. Adjuvants are substances used to generate a more robust immune response to a vaccine.

The UK, B 1.1.7 variant is impressive in that it harbours more mutations, 23, than has ever been seen before in a single virus
Opinion
3 months ago

If the phase 1 trial demonstrates the vaccine elicits a response, larger phase 2 and 3 trials will be conducted during the year
National
1 month ago

Putting the elderly at the front of the queue has been urged by public health experts, partly to protect the health system
National
2 weeks ago
Next Article