With less than a year to go, the institution’s supervisor has ratcheted up pressure on it, sources say 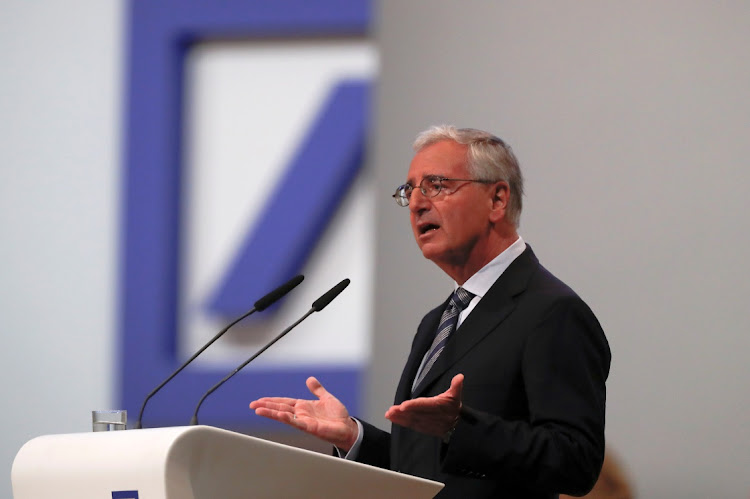 Chairman of the board Paul Achleitner delivers his speech during the annual shareholder meeting of Germany’s largest business bank, Deutsche Bank, in Frankfurt, Germany on May 23 2019. Picture: REUTERS/KAI PFAFFENBACH

Frankfurt — The European Central Bank (ECB) has often asked Deutsche Bank in recent months to name a successor to chair Paul Achleitner as the end of his term nears, two people with knowledge of the matter said.

Achleitner is due to retire next May after 10 difficult years in office in which there was two changes of CEO, billions of euros of losses and huge fines.

The 64-year-old has survived three shareholder votes on whether to oust him but said he will go next year.

With less than a year to go, the bank’s supervisor, the ECB, is still waiting for Deutsche to identify a successor and has ratcheted up pressure on Germany’s biggest bank and its chair in recent months, the people said.

The ECB’s chief supervisor, Andrea Enria, has addressed this question many times in ongoing high-level communication with the bank, said one of the people, who is an official with direct knowledge of the matter.

Deutsche has recently returned to profit but remains under the close watch of regulators who guard the health of the global financial system, of which the bank, as one of the world’s biggest lenders, is a critical part.

They have particularly been concerned by lapses in Deutsche’s money-laundering controls, a problem that extends back throughout Achleitner’s tenure.

In a major setback for Deutsche, Germany’s financial watchdog BaFin in April ordered it to enact further money-laundering safeguards and extended a mandate for a special monitor to keep track of progress.

The ECB is making the repeated demands because it wants Achleitner to leave orderly, with the central bank having enough time to vet the candidate to replace him, the people said.

Three people familiar with the bank’s search for a successor said there is a shortlist of three German men, with one adding that Deutsche will be ready to announce a successor by February or March next year. Such a late date would leave little room for manoeuvre should the candidate fall through.

If the men remain the front-runners, it may also spark questions about lack of diversity as Deutsche seeks to install more female leaders.

Weimer has publicly dismissed the idea saying earlier this year that his taking the post was “not at all a topic of discussion”. A spokesperson for Weimer declined to comment further.

It is unclear whether Weimer could change his mind. His contract as CEO of Deutsche Boerse was extended last year to 2024. Regulators would not approve his keeping both posts, the official with direct knowledge of the matter said.

Furthermore, accepting the position at Deutsche Bank would require him to resign from a job that paid him €6m last year — a multiple of Achleitner’s earnings.

Also in the running, the three people said, are Norbert Winkeljohann, an accountant and chair of Bayer, and Frank Witter, a new board member who was until recently Volkswagen’s finance chief.

Achleitner has privately sought to reassure investors that the search is under way. In recent weeks, he told investors that the new chair’s name is very likely to begin with the letter “W”, according to one person with knowledge of the matter.

But the vague nature of his plans has left regulators, and some investors, frustrated.

“The quicker we have clarity over a successor the better,” said Vanda Rothacker of Union Investment, a shareholder in the group.

Regulators have struggled for years to rein in Deutsche Bank after numerous scandals and governance issues.

The US department of justice has investigated the lender’s role in the €200bn Danske Bank money-laundering scandal, people familiar with the inquiry have said.

Deutsche has also had to pay nearly $700m in fines by US and British regulators in a separate money-laundering case involving $10bn in so-called mirror trades from Russia.

The bank has said it has significantly improved controls in recent years.

Earlier this year, the ECB clashed with CEO Christian Sewing, demanding he relinquish day-to-day oversight of Deutsche’s sprawling investment bank, fearing he had too much on his plate.

Sewing, who eventually complied, has sharply criticised the ECB’s ultra-loose monetary policy that has required lenders to pay to deposit money with the central bank and eroded profits.

The bank failed to timeously alert authorities about suspicious transactions on more than 600 occasions, the prosecutors said
World
8 months ago

ICIJ and BuzzFeed reveal confidential documents contained information about more than $2-trillion worth of transactions flagged over nearly two ...
World
8 months ago
Next Article