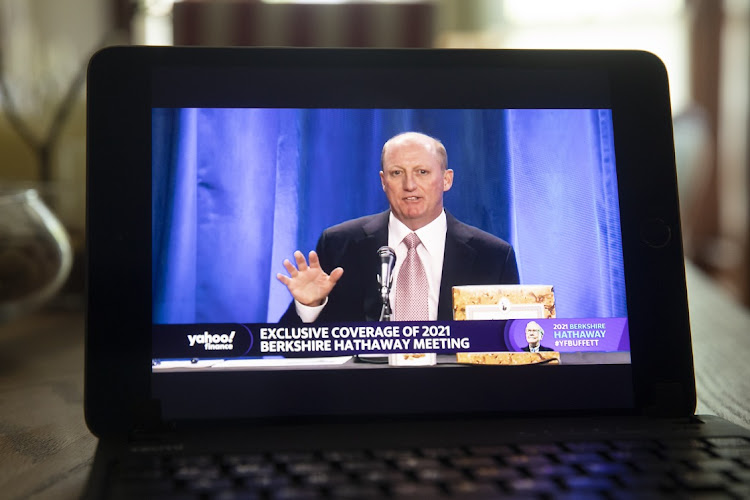 New York — Warren Buffett has ended years of speculation about his successor as CEO of Berkshire Hathaway by saying Greg Abel, who oversees the conglomerate’s non-insurance businesses, would take over if he were no longer in charge.

“The directors are in agreement that if something were to happen to me tonight, it would be Greg who’d take over tomorrow morning,” Buffett told CNBC. Buffett (90) has never publicly signaled any plan to step down.

Abel has been a Berkshire vice-chair since 2018, after a decade building Berkshire Hathaway Energy into a major US power provider.

Berkshire did not immediately respond to requests for comment.

Speculation about succession began in earnest in 2006 when Buffett, then 75, discussed it in his annual letter to Berkshire shareholders.

He has transformed Berkshire since 1965 from a failing textile company into a $628bn conglomerate with such businesses as Geico automotive insurance, the BNSF railroad, several industrial companies, Dairy Queen ice cream and See’s Candies.

Buffett also told CNBC that if anything happened to Abel, the CEO job would go to vice-chair Ajit Jain, who oversees Berkshire’s insurance businesses but is a decade older.

Vice-chair Charlie Munger (97) had said at Berkshire’s annual meeting on Saturday that maintaining the company’s culture is important, and that “Greg will keep the culture”. Munger, a Berkshire director, did not mention Jain, and his comment may have forced Buffett’s hand.

“I suspect Buffett disclosed this reluctantly,” even though “Abel’s coronation is not exactly a surprise”, said Jim Shanahan, an analyst at Edward Jones.

Shanahan said he had a “great deal of comfort” with Abel, while saying he might depart from Buffett, who lets Berkshire’s business managers operate largely without his interference, by holding them accountable to achieve performance targets.

Other aspects of Berkshire’s succession plans are unchanged. Buffett’s son Howard is expected to become non-executive chair, while investment managers Todd Combs and Ted Weschler are in line to become chief investment officer.

While Abel lacks Buffett’s magnetism and showmanship, he won Buffett’s confidence for his commitment to Berkshire’s culture, long-term thinking, and ability to spend money wisely.

“He’s a first-class human being,” Buffett said in a video message in 2013. “There’s a lot of smart people in this world, but some of them do some very dumb things. He’s a smart guy who will never do a dumb thing.”

Abel graduated in 1984 from the University of Alberta. Trained in accounting, the lifelong hockey fan worked at PwC and geothermal energy firm CalEnergy before joining Berkshire Hathaway Energy, then known as MidAmerican Energy, in 1992.

Abel became MidAmerican’s CEO in 2008, replacing David Sokol, who many investors thought was being groomed to replace Buffett and was given a broader role.

Sokol resigned in 2011 after Berkshire learnt he had invested in Lubrizol while recommending that Buffett buy the chemical company, which he did. Regulators took no action.

Berkshire Hathaway Energy’s growth has benefited from the company’s ability, unusual in the utility industry, to retain earnings rather than pay dividends. This freed Abel to buy assets such as the Nevada utility NV Energy and Alberta electric transmission company AltaLink, while expanding into renewable energy. The unit also controls one of the largest US residential real estate brokerages.

Despite outward appearances, Abel has let his hair down in public. In 2014, he accepted the Ice Bucket Challenge to raise awareness for amyotrophic lateral sclerosis, or Lou Gehrig’s Disease. Abel flashed two thumbs up to a camera as he got soaked with water.

Cash is at a near record $145.4bn, with fairly priced acquisitions in short supply
Companies
1 week ago

Anthony Tan, of Grab Holdings, expounds on how who you know may still open doors, and make billions, in the tech world
Companies
3 weeks ago

Buffett's net worth, as measured by Forbes, comes almost entirely from owning about one-sixth of Berkshire
Companies
1 month ago
Next Article