Net income more than doubled to $4.51bn in the 2020 final quarter, the highest in more than a decade 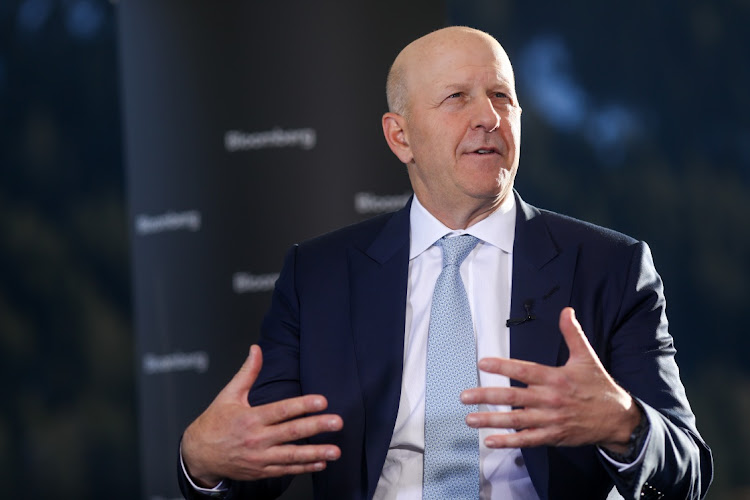 Investment-banking revenue climbed 27% from 2019 as fees from equity underwriting nearly tripled. The firm’s stock traders delivered a 40% revenue increase, making up for fixed-income trading that fell short of analyst estimates.

“Our people responded admirably to a series of professional and personal challenges, while working from home or in offices that were reshaped dramatically,” CEO David Solomon said in a statement on Tuesday.

For Solomon, the past few months have presented the most hopeful sign yet of investors embracing his strategy pivot, with last quarter’s 31% gain marking the stock’s best period since he took the top job at Goldman Sachs in October 2018.

Solomon has also been able to shrug off the 1MDB scandal that dogged his first two years atop Goldman. In October, the bank agreed to pay a record anti-bribery fine and about $5bn in global penalties to avoid more serious repercussions.

Net income more than doubled to $4.51bn in the 2020 final quarter, the highest in more than a decade, which pushed the annual total higher than 2019’s haul. Fixed-income trading revenue climbed 6%, less than the 14% gain analysts had estimated. Equities trading rose to $2.39bn.

A year that delivered great despair and economic pain will also go down as one of the most lucrative environments in Wall Street history. 2020 offered up the perfect conditions for banks to print big profits powered by commodities, rates and credit. JPMorgan Chase also flourished, closing out the most profitable year ever for its trading and investment-banking division.

As Goldman Sachs weighs special payouts for its rainmakers in 2021, its expense figures point to moderation, with bonus bumps unlikely to keep pace with company-wide revenue growth. Goldman’s compensation costs fell in the fourth quarter of 2020 and climbed 8% for the year, well short of the 22% revenue increase.

Deposits in Goldman’s consumer operation rose to $97bn. The bank has been marching ahead with new consumer products and offerings and, in its latest move, it took over the General Motors credit card business. Persistent strength in core trading and dealmaking franchises also provide a cushion to expand new lines of revenue, including the nascent transaction-banking group.

Goldman made its strongest progress in deposit growth from its debut investor day targets in 2020. The firm had set itself a goal of boosting deposits by $100bn in the coming years and has already seen a bump of $70bn, aided by the savings flood seen across the industry.

The bank’s deeper foray into the consumer market has resulted in a jump in money it set aside in the fourth quarter to cover for likely losses, with provisions for credit losses rising 5% from the third quarter tied to the growth of its credit card loans. That also resulted in a small boost in its total allowance for losses during the quarter, in contrast to most of its larger peers, which released reserves.

The bank also made progress on its goal of raking in more fees from money management, as the pool of asset-management and wealth-management funds it oversees grew to $2.1-trillion. The firm has vowed to turbocharge its capital-raising activities, driven by new planned funds in alternative investments. It has secured about $40bn in commitments across a number of new funds and has added new sectors to focus on in the coming year.