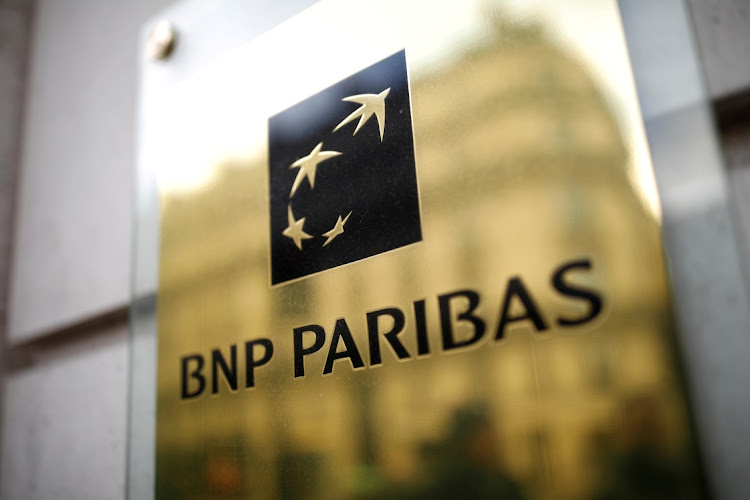 The BNP Paribas logo is seen at a branch in Paris, France. Picture: REUTERS/BENOIT TESSIER

Paris  — BNP Paribas  got a bigger-than-expected boost from trading and painted a relatively optimistic picture of the pandemic’s impact on its loan book, as it joined European peers in signalling an eventual return to dividend payments.

France's biggest bank bounced back more quickly than its local peers from losses on equity derivatives early in the pandemic, when the lenders’ strategies were tripped up by sudden dividend cancellations. The firm also indicated that Covid-driven loan losses are avoiding a worst-case scenario, setting aside about 16% less than analysts predicted, even as France and other European countries are forced to impose lockdowns again to fight the pandemic.

The new “lockdowns seem different and include the lessons we learnt from the previous ones,” CFO Lars Machenil said in an interview with Bloomberg TV. “There will be an impact, but it should be different in nature than what we saw previously.”

BNP rose 6% in Paris trading, leading European bank stocks higher. It is  still down 38% in 2020, as French lenders were hit among the hardest by the suspension of dividends.

Some of the biggest banks in the region have set aside the least amount of money last quarter for doubtful loans since the onset of the coronavirus, after a period of relative calm over the summer. Some, such as Spain’s Banco Santander, are touting their financial strength to lobby regulators to restart dividends while the likes of Deutsche Bank are making a case for bigger bonuses for bond traders who raked in bumper revenue.

BNP Paribas, too, is counting on a return to dividends when European regulators eventually lift the ban they imposed to conserve capital during the crisis. The bank said 50% of its profits are being placed in reserve for a 2020 payout. Its common equity tier 1 ratio, a measure of financial strength, stood at 12.6% at the end of the third quarter — more than regulators’ requirement, its own 2020 target, and analysts’ estimate.

The tone struck by Europe’s lenders is in stark contrast with a deteriorating backdrop of new infections and restrictions that threatens to bring more economic pain.

Bank of Spain governor Pablo Hernandez de Cos has said it is a “question of when, not if” loan books will deteriorate in the crisis.

Key figures from the bank’s results:

BNP Paribas reaffirmed its forecast that 2020 profit will be 15% to 20% below its 2019 level. In the nine months to date, net income is down 13.4% from a year earlier. While it remained profitable in the first half, unlike Natixis and Societe Generale, the bank is still moving away from some crisis-hit lines of business. It shut down its Swiss commodity trade-finance unit — a business it pioneered — after huge frauds in the sector were exposed.

Bad-debt provisions increase to A$3.2bn as the recession smashes consumers and businesses
Companies
10 months ago

The bank will buy back at least Sf1bn of shares for 2021 and plans to diverge from most European lenders by distributing the second half of its ...
Companies
10 months ago

Banks in the region are stepping up pressure on regulators for permission to resume shareholder payouts, which were largely suspended when Covid-19 ...
Companies
10 months ago

Goldman and Deutsche tell staff to work at home

Goldman and Deutsche tell staff to work at home