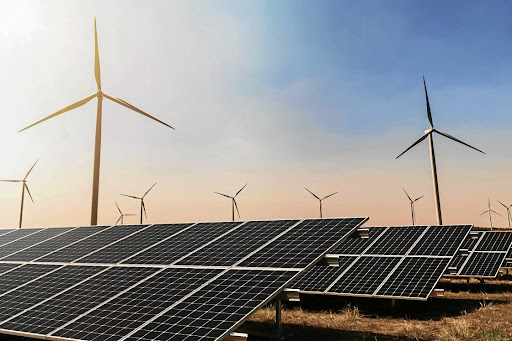 Wind and solar costs are declining, but fossil fuels are still in demand. Picture: Picture: 123RF/LOVELYDAY12

Power utility Eskom and its two largest coal suppliers, Exxaro and Seriti Resources, have signed an agreement aimed at reducing their carbon footprint through the use of renewable energy.

Exxaro and Seriti together supply Eskom with about 80% of its coal, and the agreement is also aimed at taking advantage of the low cost of solar power.

Coal mining and its use in power generation is increasingly coming under scrutiny amid a global push to combat climate change, with SA banks looking to reduce their exposure to polluting industries, which many institutional investors also aim to avoid.

Under the memorandum of agreement, Seriti envisages achieving a reduction in carbon dioxide emissions of up to 350,000 tonnes per annum, about half of its current emissions from the consumption of coal-fired electricity generation.

Exxaro aims to achieve an emissions reduction of up to 130,000 tonnes per annum at its Matla coal mine. It represents a 70% saving with that mine at full production.

The first phase of the envisaged project pipeline will see the construction of a number of solar photovoltaic facilities both on-mine and at Eskom sites, the parties said in a joint statement.

They have also committed to begin the projects as soon as possible, subject to regulatory approvals. More projects envisaged may include energy storage and wind energy facilities.

Exxaro CEO Mxolisi Mgojo said the agreement was a significant landmark in the transition to a low carbon economy for three of SA’s largest players in mining and energy.

Mike Teke, CEO of Seriti, said in the statement the company recognised that climate change and the need to decarbonise was significant challenge and imperative for SA.

Teke added: “At the same time, we are very conscious that this needs to be done in such a way that does not destroy our industrial base, or the lives of South Africans that rely on our companies for jobs, enterprise and support: this is the very basis of a just transition.”

Wind power’s ascendency in Britain could change if the grid is subject to greater demand with the huge rise in the number of electric vehicles on the ...
Opinion
8 months ago