Even though the California utility is investor-owned, a judge says the legal doctrine holds the utility liable for costs related to the fatal wildfires 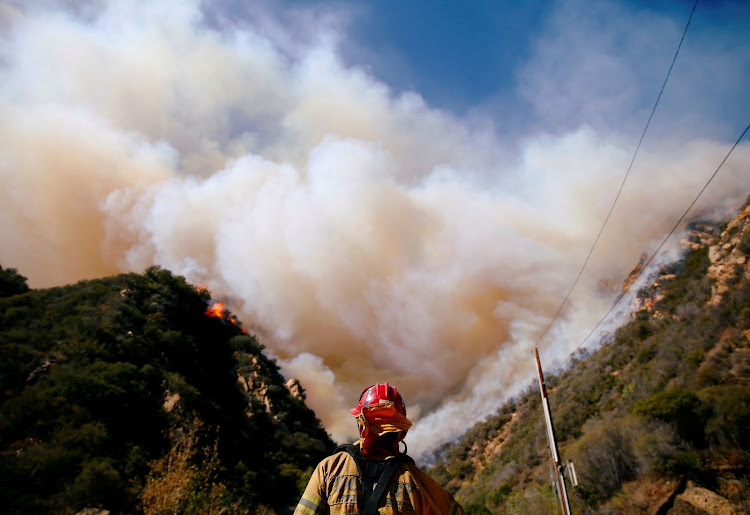 Firefighters battle the Woolsey Fire as it burns in Malibu, California, the US, on November 11 2018. Picture: REUTERS/ERIC THAYER

Wilmington/San Francisco— Pacific Gas and Electric’s (PG&E) latest attempt at escaping the California policy that saddled the power giant with billions of dollars in wildfire liabilities, pushed it into bankruptcy and led to the ousting of its CEO has failed.

On Wednesday, US bankruptcy judge Dennis Montali sided with wildfire victims, who said PG&E is subject to a legal doctrine known as inverse condemnation that holds utilities strictly liable for covering the costs of blazes linked to their equipment — regardless of whether they were negligent. PG&E had argued that it shouldn’t be subject to the rule because it’s owned by investors, not taxpayers.

PG&E blamed inverse condemnation for its downfall. California’s largest utility filed for chapter 11 while facing an estimated $30bn in liabilities tied to wildfires that its power lines were blamed for igniting in 2017 and 2018. The state is one of the few places — if not the only place — in the world that holds its power companies liable in this way.

The policy has been cited as one reason Warren Buffett’s Berkshire Hathaway Energy and other potential PG&E buyers aren’t making bids. PG&E’s former CEO, Geisha Williams, spent months fighting the doctrine to no avail and was ultimately ousted just weeks before the company filed for bankruptcy.

In deciding that PG&E is subject to inverse condemnation, Montali determined that the doctrine isn’t limited to public agencies and said the California supreme court would “reach the same conclusion”.

The company’s shares fell 1.3% to $7.45 in after-market trading on Wednesday.

At stake is the bill for the second-most destructive fire in California history, the 2017 Tubbs fire, which killed more than 20 people and destroyed at least 5,600 buildings. Claims could top $10bn, “even though the California department of forestry and fire protection determined that PG&E equipment did not ignite the blaze”, the company argued in court papers.

PG&E had said that inverse condemnation was originally developed with government-run agencies in mind — a means for them to raise rates or taxes and spread around the costs of a disaster caused by the failure of a water line, for example. Since PG&E doesn’t levy taxes and can’t hike rates without regulatory approval, the company said, the doctrine shouldn’t apply to its case.

“Since at least 1894, Californian courts have not limited the application of inverse condemnation to public entities,” Montali said in his decision on Wednesday. He also noted that California’s legislature has refused PG&E’s pleas to restrict the policy and said he has no reason to believe that the California supreme court would “step up and do it”.

He did, however, say the doctrine doesn’t extend beyond property damage and is subject to some limitations.

Montali’s ruling comes as the company and a committee representing wildfire victims are getting ready for a trial that will decide how much PG&E must pay to compensate residents and businesses hurt by fires traced to company equipment. Even with a victory, PG&E would’ve still been on the hook for tens of billions of dollars in wildfire damages that critics claim were caused by negligence.

The victims’ committee argued that PG&E must be subject to the inverse condemnation doctrine because California courts have consistently ruled that it applies even to investor-owned utilities.

State officials said in a report earlier this year that inverse condemnation increases the danger that other utilities will also go bankrupt, but when lawmakers had the chance to eliminate the doctrine, they refused to rewrite the California law.

Bill Johnson says the embattled PG&E — forever linked to the fatal wildfires of California — found him, and that he’s ‘on a mission’
Companies
2 years ago

Fast winds to whip up more trouble for California firefighters

If the power company’s equipment can be linked to the Kincade Fire, it is likely to be wiped out completely
World
2 years ago
Next Article