The California power utility linked to fatal 2017 and 2018 wildfires is likely to pay more than $1.7bn in penalties for lack of equipment maintenance 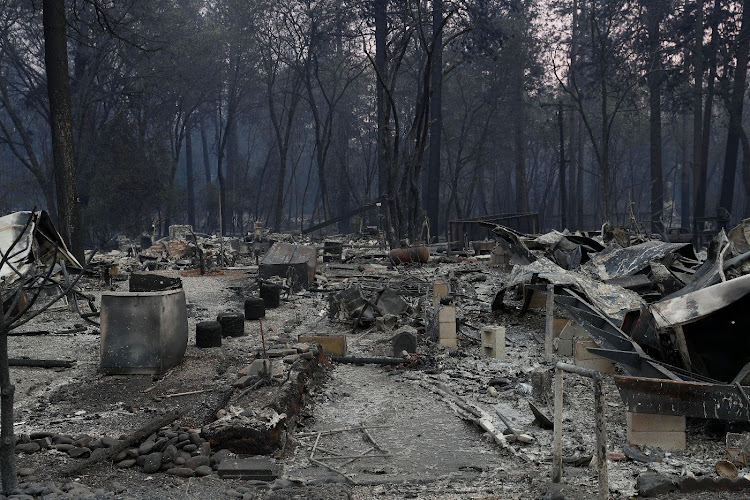 The remains of homes destroyed by the Camp Fire in Paradise, California, the US, on November 11 2018. Picture: REUTERS/STEPHEN LAM

New York/San Francisco — Pacific Gas and Electric (PG&E) is nearing a settlement with California regulators that would have it paying more than $1.7bn in penalties for failing to properly maintain equipment involved in sparking wildfires in 2017, people familiar with the matter said.

The bankrupt California utility has agreed to invest $50m in corrective measures. The rest of the settlement would involve money the company has already spent on maintenance and inspections that it would be barred from recovering from customers, said the people, who asked not to be identified because the information isn’t public.

The penalties are tied to a California public utilities commission case in which the company’s wildfire safety practices were found to be unsafe and in violation of state rules.

PG&E said in a statement that it has been “actively engaged in settlement discussions” with the commission’s enforcement division and other parties over the past three months. The groups “require additional time to finalise the agreed-upon terms of the settlement”, the San Francisco-based power giant said. The utility commission didn’t respond to requests for comment.

A deal would eliminate some overhang for PG&E, which was forced into bankruptcy in January after its equipment was found to have ignited deadly wildfires in 2017 and 2018, saddling it with an estimated $30bn in liabilities. PG& Ehas already set aside the vast majority of the funds it would need to cover the penalties, people familiar with the situation said.

The enforcement division of California’s utility commission and PG&E said on Friday that they had reached an agreement in principle on the penalty case, but they fell short of outlining the details of the arrangement.

The settlement does not cover any potential violations tied to wildfires that broke out in 2018, including the Camp Fire, which was started by a PG&E power line and was the deadliest in California history.

Bill Johnson says the embattled PG&E — forever linked to the fatal wildfires of California — found him, and that he’s ‘on a mission’
Companies
2 years ago

If the power company’s equipment can be linked to the Kincade Fire, it is likely to be wiped out completely
World
2 years ago

A furious Governor Gavin Newsom slams the power utility, which turned off the lights this week, and wants structural changes
World
2 years ago

Pacific Gas and Electric, which ignited California wildfires in 2018 and has turned the power off in 2019 to avoid more, is fighting for its life
Companies
2 years ago
Next Article