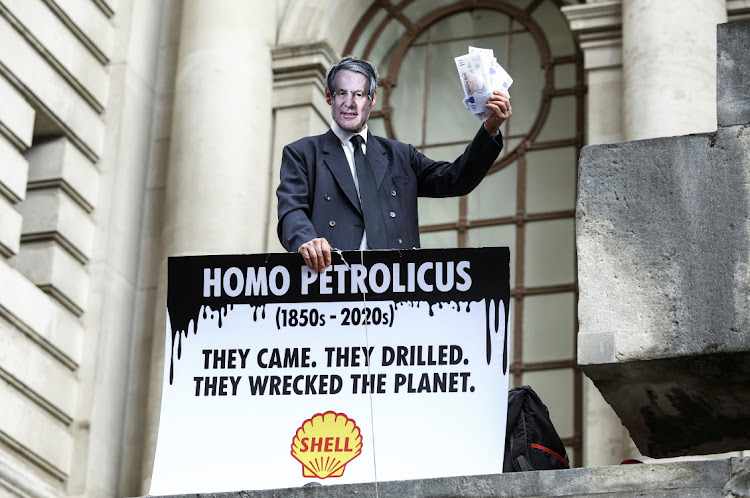 A climate activist wearing a face mask depicting Shell's CEO Ben van Beurden attends a protest outside Shell headquarters during the company's first investor meeting since moving to the UK, in London, May 24. Picture: REUTERS/HANNAH MCKAY.

Shell is due to ask its shareholders to vote on a resolution supporting its climate strategy and rebuff an environmental resolution from activists, another iteration of which obtained 30% of votes at 2021’ AGM.

“Can I assume that you do not want me to speak?” Mackenzie asked over chants such as “we will stop you” and “Shell must fall” that delayed the start of proceedings.

Police arrived at the venue in central London but allowed protesters to continue chanting for over an hour after the meeting was supposed to start.

“We’re here to embarrass them and hold them account for as much as we can. They know what’s going on. We’re not here to educate them,” said Aidan Knox of activists Money Rebellion, which is linked to climate protest group Extinction Rebellion.

Both Mackenzie and Shell CEO Ben van Beurden stayed on the podium, watching the protests stone-faced, even as a screen behind them said the meeting was “temporarily paused” and nonprotesting shareholders were asked to leave.

After almost two hours, Mackenzie said police had asked all Shell employees, including board members, to leave the venue. Once they had left, the protesters departed voluntarily with police watching on. A Shell spokesperson said the shareholder meeting would resume in a different room after a break.

“We respect the right of everyone to express their point of view and welcome any engagement on our strategy and the energy transition which is constructive. However, this kind of disruption … is the opposite of constructive engagement,” Shell said in a statement.