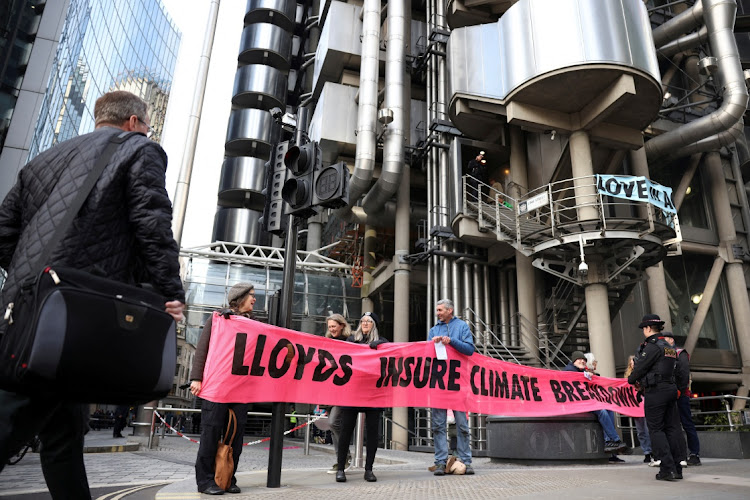 Activists from Extinction Rebellion hold a banner outside the Lloyd's of London building in the City of London financial district in London, Britain, in this April 12 2022 file photo. Picture: REUTERS/HENRY NICHOLLS

Commercial insurance market Lloyd’s of London is encouraging members of its 100-odd syndicates to attend its annual general meeting next week online rather than in person, due to the threat of climate protests.

Since Lloyd’s sent out invitations for the May 19 AGM on April 19, “the risk of disruption has significantly increased”, chair Bruce Carnegie-Brown said in a notice on the market’s website dated May 10.

“To ensure the safety and security of our members and to allow the meeting to proceed in an orderly and fair manner, it is with regret that I must now strongly encourage all members attending the AGM to join virtually and not to attempt to enter the Lloyd’s building on that day.”

Climate activist groups Extinction Rebellion and Mothers Rise Up have previously staged protests outside the Lloyd’s of London tower in the City of London, particularly around the market’s underwriting of coal.

An Extinction Rebellion spokesperson said the group did not plan any action for the Lloyd’s AGM.

“Instead of trying to hide from public anger by shifting their AGM online, Lloyd’s needs to be brave, take bold action and stop insuring morally hazardous projects,” Extinction Rebellion UK said in an emailed statement.

Mothers Rise Up said it was not planning action at the AGM but was separately meeting Carnegie-Brown on May 17.

Lloyd’s, whose members insure large risks from ships to energy rigs, introduced its first climate strategy in 2020 and has asked syndicates to stop providing new cover for coal businesses.

But activists say the policy does not go far enough, as it stops short of mandating that insurers pull out of coal.

Global climate emergency is unquestionably upon us
Opinion
1 week ago