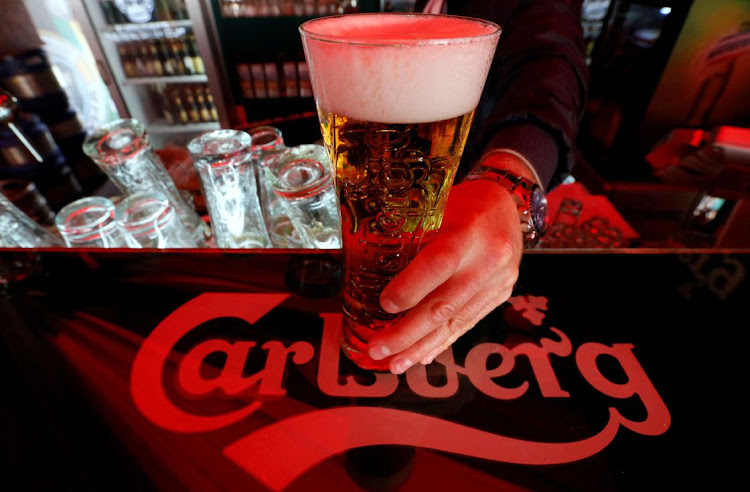 A bartender holds a glass of Carlsberg beer in a bar in St Petersburg, Russia. Picture: ALEXANDER DEMIANCHUK/REUTERS

Copenhagen  — Danish multinational brewer Carlsberg, the most exposed to the Russian market, expects its decision to sell its business there to result in a writedown of about 9.5-billion Danish krone ($1.39bn), it said on Thursday.

The company, which has eight breweries and 8,400 employees in Russia, said in March it would sell its business in the country, joining an exodus of Western companies since Russia’s invasion of Ukraine.

The writedown did not take into account any external offers for the business and was subject to a "very high degree of volatility and uncertainty", Carlsberg said, adding that the sale could take up to 12 months.

In addition, Carlsberg reported a currency loss adjustment to its Russian business worth 4-billion krone triggered by a recent depreciation of the Russian rouble.

Dutch rival Heineken has also said it will exit Russia and in March said it expected to book related charges of about €400m.

Carlsberg had non-current assets in Russia worth 19.2-billion Danish krone by the end of 2021, its annual report said.

"The writedown isn’t quite as grim as one might have feared," Sydbank analyst Per Fogh said. "This is what they consider to be fair value of the asset now, but the question still remains what a potential buyer would pay for it."

Carlsberg last year generated 10% of its revenue and 6% of its operating profit in Russia, where it took full control of the Baltika group of breweries in 2008.

Since then, however, it has faced sluggish sales in a sanctions-hit economy while facing Russian regulations aimed at curbing alcohol abuse.

Carlsberg lowered its operating profit growth forecast for this year to between minus 5% and plus 2%, compared with previous guidance of 0% and 7%.

Shares in Carlsberg, which have shed nearly a quarter of their value since the start of the year, fell slightly on the news but were up 1% before midday.

The brewer said it also expected 300-million krone of Ukraine impairment charges along with goodwill writedowns of 700-million krone for the Central and Eastern Europe region, which includes Ukraine.

Food company says price increases were passed on to consumers, and forecast more as the war in Ukraine raises costs
Companies
2 months ago

Companies scramble to assess impact of sanctions on Russia

Companies scramble to assess impact of sanctions on Russia