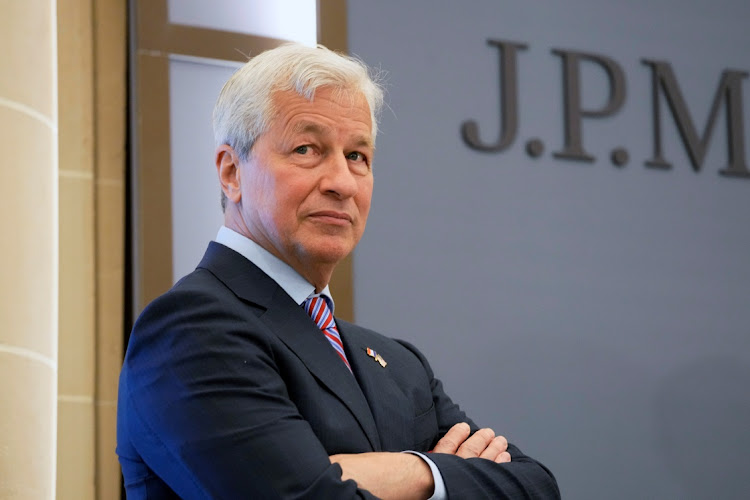 New York — JPMorgan boss Jamie Dimon warned on Monday that the bank could lose about $1bn (R14.6bn) on its Russia exposure, the first time it has detailed the extent of its potential losses resulting from the conflict in Ukraine.

In his keenly watched annual letter to shareholders, the chair and CEO of the biggest US bank by assets also urged the US to increase its military presence in Europe and reiterated a call for it to develop a plan to ensure energy security for itself and its allies.

Dimon did not provide details on JPMorgan’s potential loss number or a time frame, but said the bank was concerned about the secondary impact of Russia’s invasion of Ukraine on companies and countries. Russia calls its actions a “special operation.”

Global banks have detailed their exposure to Russia in recent weeks but Dimon is the most high-profile world business leader yet to comment on the broader impact of the conflict.

“America must be ready for the possibility of an extended war in Ukraine with unpredictable outcomes. We should prepare for the worst and hope for the best,” he wrote.

Dimon addressed the relationship between the US and China and said the US should revamp its supply chain to restrict its scope to suppliers within the US or to only include “completely friendly allies”. He urged the US to rejoin the Trans-Pacific Partnership , one of the world’s biggest multinational trade deals.

Commenting on the macroeconomic environment, Dimon said the number of Federal Reserve interest rate hikes “could be significantly higher than the market expects.” He also detailed the bank’s rising expenses, in part due to technology investments and acquisition costs.

The letter is Dimon’s 17th as CEO. While Dimon is not the only CEO of a top US bank to write such letters, his have become must-reads among Wall Street's elite and policymakers for the view they provide into his political and economic ideas.

This year’s letter comes as the Russia-Ukraine war and high inflation are hurting the economy, and as Dimon faces new scepticism from investors over expenses.

Some question his plans to increase spending on the bank’s information technology and campaigns to take market share in businesses and geographies where JPMorgan currently trails competitors, such as in Germany and the UK.

JPMorgan decided earlier this year to hold its first investor day since the pandemic began to address doubts about its spending plans. The meeting will be held on May 23.

Dimon has spent more than a decade building what he calls the bank’s “fortress balance sheet,” and he said it is now robust enough that JPMorgan could withstand losses of $10bn or more and “still be in very good shape.”

While Dimon wrote that he is not worried about the bank’s exposure to Russia, he said the war in Ukraine will slow the global economy and will impact geopolitics for decades.

“We are facing challenges at every turn: a pandemic, unprecedented government actions, a strong recovery after a sharp and deep global recession, a highly polarised US election, mounting inflation, a war in Ukraine and dramatic economic sanctions against Russia,” he said.

On acquisitions, Dimon said that the bank will be reducing stock buybacks over the next year to meet capital increases required by federal rules “and because we have made some good acquisitions that we believe will enhance the future of our company.”

JPMorgan has been on a buying spree, spending nearly $5bn on acquisitions over the past 18 months. Dimon said that will increase “incremental investment expenses” by roughly $700m this year.

Investments in technology will add $2bn to expenses this year, Dimon said.

Lloyd’s says business underwritten in Ukraine, Russia and Belarus accounts for less than 1% of the market’s total business
Companies
4 months ago