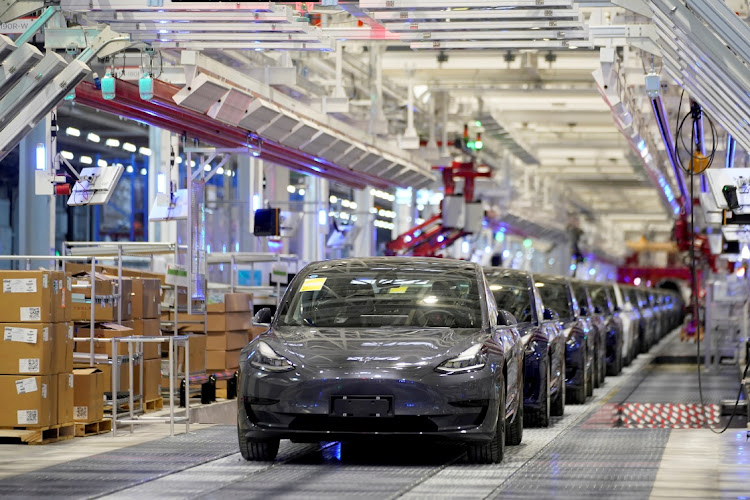 Tesla China-made Model 3 vehicles are shown during a delivery event at its factory in Shanghai, China, in this January 7 2020 file photo. Picture: REUTERS/ALY SONG

Tesla boosted its deliveries by 87% to a record high in 2021, pushing up its shares more than 13% on Monday.

Here are some of the ways Tesla navigated supply chain challenges.

Tesla told some customers they could take vehicle delivery with some missing parts, such as Bluetooth chips and USB ports. Tesla also removed some features such as radar sensors and lumbar support for front passenger seats, which made the car less complicated to build. Tesla did not respond to a request by Reuters for comment.

Tesla increased vehicle prices to address higher costs. American consumers have to wait for seven months if they order a Model Y version, whose price went up 18% last year.

Tesla CEO Elon Musk said Tesla was able to substitute alternative chips for some that were in short supply. Volkswagen CEO Herbert Diess said Tesla’s ability to rewrite software to support the new chips in two to three weeks was impressive.

How Tesla is different

Tesla designs more hardware and writes more software than many rivals, which rely on suppliers’ efforts. Musk has called the company “absurdly vertically integrated compared to other auto companies”.

Tesla insider said: “We design circuit boards by ourselves, which allow us to modify their design quickly to accommodate alternative chips like powerchips.”

In-house engineers design the bulk of the complex software that runs the Tesla vehicles, which Musk has described as a “computer on wheels”.

Tesla also designs the chips used in its driver assistant systems and makes parts ranging from seats to battery cells in-house. It also owns its own direct sales, service and charging networks.

“We’re designing and building so much more of the car than other OEMs [original equipment manufacturers] who will largely go to the traditional supply base and like I call it, catalogue engineering. So it is not very adventurous,” Musk said.

Ambrose Conroy, CEO of Seraph Consulting, said: “They control what’s going on in that vehicle at a level that no other automaker wants to do it. It is much more aligned to the integration that Henry Ford had originally with the Model T.”

In 2020, many vehicle makers cut chip orders as the pandemic and lockdown measures hit demand. But Tesla never reduced its production forecast with suppliers, because it expected rapid growth, which helped it weather the chip shortage, Tesla CFO Zach Kirkhorn has said.

“They’ve just been smarter about it than other companies in terms of making sure there’s buffer stock,” a Tesla supplier executive said.

Tesla’s direct ties with chip suppliers allowed it to move faster than traditional carmakers, which rely on first-tier suppliers that have relationships with chipmakers, said Kevin Anderson, principal consultant at Write-Tek.

The better-than-expected fourth-quarter results pushed Tesla’s total sales for the year to more than 936,000, up about 87% over 2020’s deliveries of ...
News
3 weeks ago

CONOR SEN: Is now the time to buy your first luxury EV?

y 2028, makers will want affluent vehicle buyers to believe that gasoline-powered cars are as cool as floppy disks or having a landline
Opinion
3 weeks ago

For the entire industry, analysts expect improved access to semiconductors and increased vehicle production this year
Companies
3 weeks ago
Next Article