The investment bank advised on more than $1-trillion worth of M&A deals, giving it a market share of more than 24% 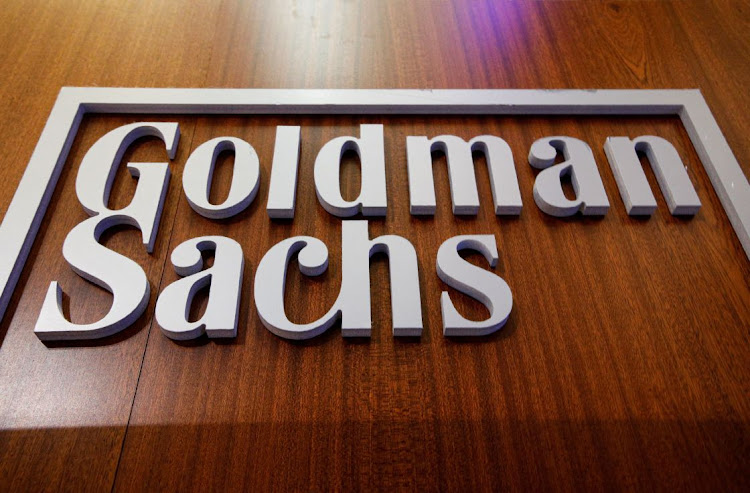 The Goldman Sachs company logo is shown on the floor of the New York Stock Exchange in New York City, US. File photo: REUTERS/BRENDAN MCDERMID

Goldman Sachs held on to the top spot in deal making during a record year.

The investment bank was the No. 1 adviser on M&A for the fifth year in a row, as measured by the total dollar value of transactions it handled, according to data compiled by Bloomberg.

Goldman’s dominance comes as global M&A and related deals surpassed $5-trillion in volume for the first time. The bank advised on more than $1-trillion worth of deals, giving it a market share of more than 24%, the data show.

The fees Goldman collected from that work — more than $4bn for the first nine months of 2021 — easily topped the earnings of each of its closest rivals, JPMorgan and Morgan Stanley, according to filings by the banks. The fees don’t include those for work completed in the fourth quarter, which will be disclosed in later filings.

Equity deals and many forms of debt issuance across the industry also hit all-time highs. Goldman is also the top bookrunner on initial public offerings globally, the data show.

“We’ve been pretty microscopically focused to be strong in every subsector of the economy,” Dan Dees, Goldman’s co-head of investment banking, said in an interview. He said the bank has been investing in healthcare, technology and financial sponsors’ businesses.

“We very deliberately flooded the zone in the places we thought we saw secular growth and secular opportunity,” Dees said.

In a record M&A year, competition has been as stiff as ever. Barclays gained share to be the most active European bank, rising above Credit Suisse this year. Evercore posted the largest jump in volumes of the top boutique firms, with more than $100bn in deal volume more than the year before, the data show. Rothschild jumped into the top 10, while UBS Group fell out.

“This was a banner year in every respect — number of transactions, dollar volume of transactions, activity with corporates, activity with private equity firms,” said Ralph Schlosstein, Evercore’s co-chairperson and co-CEO. “The continued buildout of our healthcare and technology and information businesses have been huge contributors this year, and also the increased globalisation of our business.”

There are signs that the deal boom will continue. Private equity firms are in the market to raise record funds, while some advisers believe mega-deals are poised to make a comeback.

And with that, could come another spate of hiring.

“You’ll see us in the new year continuing to hire more bankers to take advantage of the opportunity, and embrace this growth mindset over the next cycle,” Dees said. 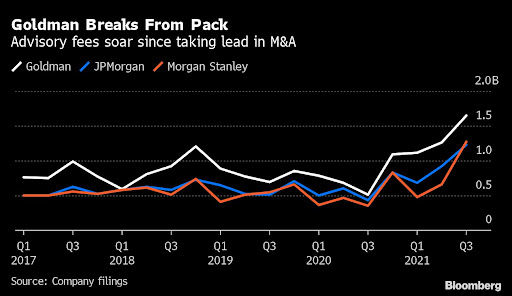 Goldman Sachs held on to the top spot in dealmaking during a record year. Graphic: BLOOMBERG

High-yield debt and leveraged loans in the US hit new highs of issuance, with investment-grade deals falling just short of levels reached in 2020, when companies rushed to raise cash in the early innings of the Covid-19 pandemic.

JPMorgan led investment-grade deals globally this year, as well as high-yield offerings. Bank of America was the top underwriter for leveraged loans in the US, the most active region globally.

“The M&A force multiplier will be on display in the new year, with corporate acquisitions increasing corporate financings,” said Thomas Sheehan, Bank of America’s head of global investment banking. “It’s been a really blistering year for M&A activity and equity and leveraged finance, all of which had record years.”

Goldman’s market share for IPOs — 6.7% — pushed it into the No. 1 slot, bypassing last year’s top two listings advisers, Credit Suisse and Morgan Stanley. Citigroup, JPMorgan and Bank of America gained share, while Credit Suisse fell to sixth in the rankings.

China International Capital fell out of the top 10, while Barclays rose to eighth in the ranking. More than $664bn , another all-time high, was raised worldwide in IPOs, including by special purpose acquisition companies, the data show.