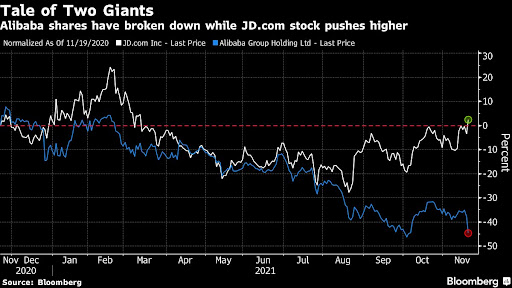 The Hang Seng index dropped as much as 1.9%, the most in two weeks. Alibaba slumped more than 10%, spurring losses in Meituan and Tencent Holdings. Also weighing on the benchmark was property management firm Country Garden Services Holdings. It plunged 17% to be the worst performer after raising $1bn in a share placement.

Alibaba is the latest technology company that has missed estimates in this earnings season, after online gaming giant Tencent’s revenue came in below estimates last week. Among the 16 companies that have reported quarterly earnings on the Hang Seng Tech index, seven have fallen behind market expectations, Bloomberg-compiled data show.

Alibaba’s results “reminded investors that the golden time of Chinese technology companies is likely behind,” said Castor Pang, head of research at Core Pacific-Yamaichi International Hong Kong. “Now they have to deal with longer-than-expected earnings impact from tightened regulations and a slowing Chinese economy.”

Still, investors are rewarding firms that could still deliver positive earnings surprises amid a challenging macro environment. JD.com, a major rival of Alibaba, saw its shares jumping as much as 6.8% in Hong Kong to the highest in eight months, after announcing its third quarter revenue that beat analyst forecasts.

JD.com’s gain helped offset some losses in the Hang Seng Tech index, which tracks mostly Chinese online titans. The measure pared declines to 1.3% at 11:29am local time after falling 2.1% in early morning trading.

Morgan Stanley strategist Laura Wang warned on Thursday that Chinese companies are facing the worst earnings season since 2018, while downward revisions by analysts to profit views are likely to extend through the end of this year.

Can a market-leading business such as this, in what will soon be the world’s largest economy, be worth zero?
Opinion
2 weeks ago

China’s largest e-commerce company cashes in on its version of Black Friday.
News
2 weeks ago