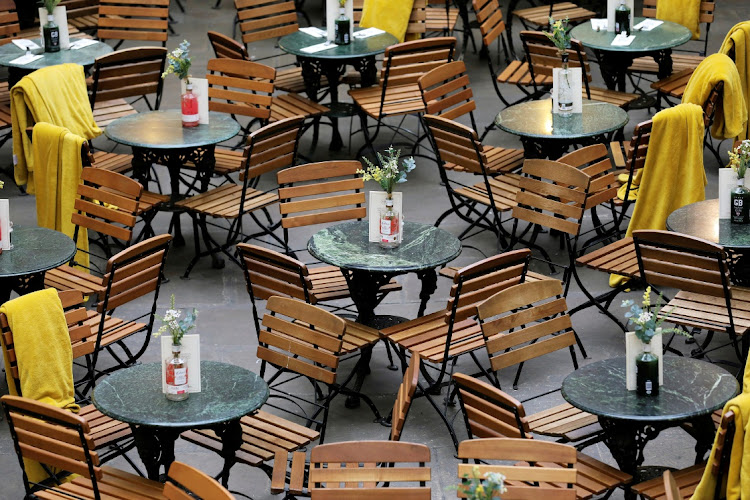 Dave Portnoy, founder of the pop culture site Barstool Sports, has a talent for shape shifting.

In the last year alone, the 44-year-old internet celebrity has alternated between conservative hero, meme-stock evangelist and small business saviour, all while maintaining his day job as a podcast host and hard-to-please reviewer of pizza places. “This is like a faucet of grease,” he memorably described one slice.

Now, add aspiring food mogul to the list. After announcing a new frozen pizza line with Walmart earlier this month, the self-described Stool Presidente is also jumping in on the virtual “ghost kitchen” trend, assembling an army of independent restaurants to deliver peak bro food to his legions of fans. To do so he is partnering with eatertainment pioneer and Planet Hollywood founder Robert Earl to launch a virtual restaurant concept built around the Barstool brand.

Barstool Bites, which will debut in October, plans to offer sandwiches, super spicy chicken wings, dips and buckets of flavoured popcorn to the same hard-core sports buffs who gobble up Barstool’s always irreverent, sometimes sophomoric commentary. There’s more in store, including physical restaurants and Barstool food trucks, which are promoting the brand.

“We’re going to experiment with giving our fans the ability to order the types of food we eat when we’re sitting on our couch watching footballs on Saturdays and Sundays,” said Erika Nardini, Barstool’s CEO.

The New York-based media company, which Portnoy founded in 2003, has expanded from blogging to videos and podcasts that have won it 135-million social media followers. Last year he sold 36% of the company to casino operator Penn National Gaming for $163m. Barstool has since launched an online betting business and an electrolyte-spiked drink designed to address hangovers — all of which can be promoted by the company’s online hosts on programmes such as Pardon My Take and Spittin Chiclets.

“They do like 80 shows a week,” Earl said of his new partner. “All these podcasters are having dishes named after them and they’re all going to be constantly talking about them.”

Barstool Bites will follow the ghost kitchen playbook, shunning expensive physical locations for what may ultimately be hundreds of local restaurants that prepare Barstool’s food, then deliver it via third-party apps like DoorDash and GrubHub. The virtual dining brand is the latest entry into an already crowded field that has everyone from restaurant chains like Applebee’s, Chuck E Cheese, and Nathan’s to former Uber Technologies CEO Travis Kalanick chasing the delivery-only business.

Though digital eateries have been around for several years, the concept took off during the pandemic, when many restaurants had to stop serving indoors and left kitchen space idle for other uses. An opening rose for entrepreneurs to launch restaurant concepts almost overnight, without the investment in real estate, kitchen gear, staff and other expenses that can easily run up to $375,000 for each physical location. Instead, they could spin up a new digital storefront built around a narrow food offering and a search engine-optimised brand name.

In the 12 months to June, delivery-only restaurant orders in the US jumped 66%, while on-premises dining fell 39%, according to market researcher NPD Group. Uber’s delivery revenue more than doubled from 2020 to $1.96bn in the second quarter. That business, much of which is food, was bolstered by the acquisition of Postmates.

Sterling Douglass, CEO of restaurant technology supplier Chowly, estimates that there are nearly 100,000 virtual restaurants already in the US. Euromonitor International figures sales from ghost kitchens could reach $1-trillion globally by 2030.

Going all-in on the trend is Earl, a 70-year-old UK native who got his start promoting dinner shows in London with sword fights and six-course meals consumed with a dagger. He ran the Hard Rock Cafes in the 1980s, before founding Planet Hollywood the following decade, with Arnold Schwarzenegger, Sylvester Stallone and Demi Moore as early spokespeople. The chain expanded too rapidly though, and declared bankruptcy twice.

He still owns restaurants, such as the Buca di Bepo brand, but he has recently recast himself as a ghost kitchen mogul. Earl said he began to think seriously about the delivery business early into the pandemic after seeing sales decline in his traditional restaurants, many of which are based in malls where foot-traffic plummeted.

Earl’s year-old, Orlando, Florida-based company, Virtual Dining Concepts, channels his eatertainment roots, with kitchen concepts often built around celebrities who can generate free publicity or have a vibrant social media following. He has launched brands with singer Mariah Carey (Mariah’s Cookies), Saved by the Bell star Mario Lopez (Mario’s Tortas Lopez), and Jersey Shore character Pauly DelVecchio Jr. (Pauly D’s Italian Subs). The deals are a 50/50 partnership with the celebrities he works with, under which they share the profits.

Earl’s breakout hit is MrBeast Burger, a concept launched in December with YouTube personality Jimmy Donaldson, who is famous for stunts like giving away 40 cars to his 40 millionth subscriber. Earl said the pair have sold one million of the $7.50 burgers so far. The brand now has almost 1,000 kitchens from Bangor, Maine, to Honolulu, preparing its food, with another 1,000 to come. “Which I think makes it by far the fastest-growing restaurant chain in the world,” Earl said.

Also benefiting from the trend are some of the restaurants hit hardest by the pandemic. Marylisa Carrier and her husband, Robert, were just weeks away from shuttering their Sparks, Nevada, burger joint in 2020 when they got a call from a salesperson pitching Earl’s Virtual Dining. The Carriers were told they could generate $200 a day in revenue from MrBeast. Instead, receipts have been triple that. The Carrier’s restaurant, Sizl Burger, retains about 67% of the average $25 order. It has allowed the couple to keep their business open and even consider expanding. “It’s been a huge, huge thing for us,” Marylisa Carrier said.

There are risks that come with the surge in virtual dining, however. One is trying to control quality when the food is prepared by hundreds of independent operators scattered all over the country. It’s also unclear whether the restaurants will lose interest in virtual brands when the pandemic subsides and their kitchens become busy with in-person diners.

“We don’t know what’s going to happen when the guests show up again,” said Greg Golkin, an investor in restaurant businesses through his Kitchen Fund in New York. “A lot of these orders are coming out of the back of an Irish pub.”

Already Barstool employees have gone online to rate their boss’s frozen pizza. No surprise though, they’re not very critical. Portnoy gave himself a 10 out of 10.

As a new variant that originated in India spreads rapidly elsewhere, measures to contain the disease will remain visible in Europe
World
8 months ago

How to... pivot a business during a pandemic

Many businesses have had to shut their doors because of the Covid-19 lockdown, but some have managed to stay afloat by changing direction. For ...
Careers
1 year ago
Next Article