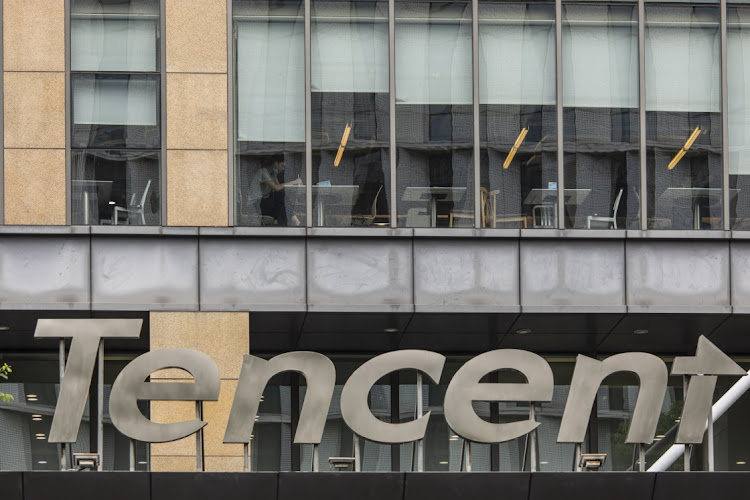 Signage for Tencent Technologies Inc. is shown outside one of the company's office buildings in Shanghai, China, in this August 16 2021 file photo. Picture: BLOOMBERG/QILAI SHEN

Shanghai — Chinese gaming and social media giant Tencent Holdings beat forecasts with a 29% climb in second-quarter profit, helped by an increase in takings from popular games and growth in online advertising revenue.

Robust demand for games such as Honor of Kings and PUBG mobile offset a decrease in revenues from its battle royale title Peacekeeper Elite.

Net profit for the three months through June came in at ¥42.6bn ($6.6bn), above a Refinitiv consensus estimate of ¥34.4bn. Profit was also boosted by an increase in the fair-value assessment of some of the companies it has invested in.

The results come amid investor concerns that Tencent will continue to be ensnared in an onslaught of regulatory actions that Chinese authorities have unleashed on several sectors, with the tech industry hit hardest.

In particular, regulators have launched a slew of antitrust probes, cited the need to boost data privacy and pushed for better treatment of consumers.

Tencent has been barred from entering into exclusive music rights agreements and saw its $5.3bn plan to merge DouYu International and Huya blocked by China's market regulator last month.

Shares in the world’s largest gaming firm by revenue also took a battering after a state media article described online games as “spiritual opium” and expressed concern about their impact on children.

That fallout saw Tencent temporarily lose its crown as Asia’s biggest company by market capitalisation to chipmaker TSMC earlier this week. Its shares remain about 8% lower since Aug. 3.

Tencent has since announced new measures to reduce the time and money children spend on games, starting with its most popular game, Honor of Kings.

Players aged under 16 accounted for only 2.6% of its gross game receipts in China during the second quarter.

Naspers, through its subsidiary Prosus, holds e-commerce assets valued at $39bn (excluding China’s Tencent). That is four times the size of Sasol’s ...
Money & Investing
10 months ago
Next Article