Insurers, employers and lawyers in the UK and US see mandatory vaccinations as a growing area of contention as workers return to their desks 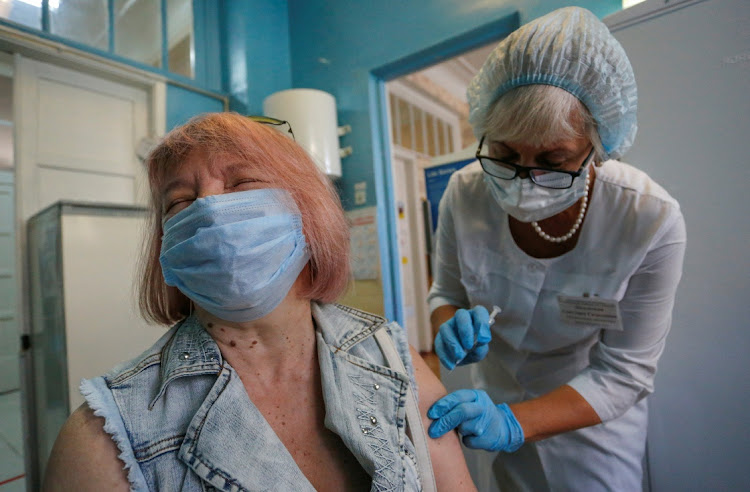 A woman reacts as she is injected with Sputnik Light vaccine against the coronavirus disease (COVID-19) at a local hospital in the rebel-controlled city of Donetsk, Ukraine August 2 2021. REUTERS/ALEXANDER ERMOCHENKO

London — Liability insurers on both sides of the Atlantic are scaling back the cover they offer companies ahead of an expected wave of discrimination claims as employers call staff back to their desks after 18 months of pandemic-induced home working.

There have been about 2,950 Covid-19-related employment lawsuits in the US since the start of the pandemic, ranging from disputes over remote working to workplace safety and discrimination, law firm Fisher Phillips says.

That is making underwriters nervous.

“How you don't discriminate, how you deal with vaccination and testing — those are all difficult things for employers to work through,” he told Reuters.

Karen Cargill, management liability specialist at insurance broker Marsh in London, said a fifth of notifications by its insurer clients of possible EPLI claims in Britain have been Covid-19-related in the past six months.

Insurers, employers and lawyers see mandatory vaccinations as a small but growing area of contention.

Tech giants such as Alphabet's Google and Facebook are among firms who have told all US employees to be inoculated against Covid-19 before stepping into offices or onto campuses to help protect the health and safety of colleagues.

US vaccination-related claims amount to less than 5% of total Covid-19 suits — or fewer than 150 — said Kevin Troutman, partner and co-chair of Fisher Phillips' Healthcare Industry Team. But that is expected to rise.

“The vaccine mandates conundrum is just the next version of Covid-19 claims that we're going to see,” said Kelly Thoerig, who oversees Marsh's US EPLI practice.

According to the preliminary results of an ongoing pulse survey of more than 200 American employers launched on July 19 by consultants Mercer, 14% now require staff to be vaccinated to work at a company site.

A number of US employers with such policies have already faced court hearings. Workers at a Texas hospital alleged the vaccinations are experimental and that staff are being used as “human guinea pigs”.

The case was dismissed in June and some lawyers say this type of case is unlikely to be viable.

But workers could have protection if they are unable to be vaccinated for medical or religious reasons — unless this would pose an “undue hardship” on the business, the US Insurance Information Institute says.

Vulnerable workers could also sue employers because a lack of a mandatory vaccination policy puts them at risk.

However, even if cases are thrown out, defence costs would fall to the employers — and their insurers.

In one case in Scotland, a chef won his unfair dismissal claim after being fired without notice having raised concerns about a lack of personal protective equipment and the risk of passing on the coronavirus to his vulnerable father.

On vaccination, lawyers say that “no jab, no job” contracts — such as those offered by London-based Pimlico Plumbers — risk discriminating against younger staff, who may not yet have been offered their second vaccine, or pregnant women, who might prefer to be vaccinated after childbirth.

“If an employee has decided to refuse the vaccine through personal choice... it would be possible to exclude them from the premises on the grounds of health and safety,” said Jo Keddie, a lawyer at Winckworth Sherwood.

"(But) if an employee refuses to have the vaccination because of a health condition or a religious belief, they could argue that a mandatory vaccination policy is disability or religious discrimination.”

Many insurers are cutting their exposure by adding restrictions to new or renewed policies, requiring employers to bear more of the costs, and increasing premium rates, according to Jason Binette, EPLI  product manager at AmTrust Exec in Windsor, Connecticut.

Lloyd's of London insurers are among those to strip EPLI cover out of broader insurance packages they offer businesses, to keep a lid on prices. But specialist insurers in Bermuda, for example, still offer such cover, brokers said.

Business is booming for those who still sell EPLI, and premium rates are surging.

AmTrust has recorded a 22% increase in requests for cover since the pandemic started, driven in part by new small business customers.

“I'm seeing companies that have been about for 40 years that haven't had coverage ... and now want it,” Binette said, adding that premium rates had jumped by 10-20%.

Sam Vardy, associate director at insurance broker Howden in London, puts the rate rise at 25-75% over the past 18 months.

Some employers simply say the price of EPLI is too high to risk bringing staff back to offices, according to Julia Graham, CEO of UK insurance buyers' association Airmic.

“They can't get (insurance) at the price they are willing to pay,” she said.

Liberty has spent about R2.57bn of the initial R3.1bn in reserves it set aside in 2020 to help it deal with the expected effect of Covid-19 on its ...
Companies
10 months ago