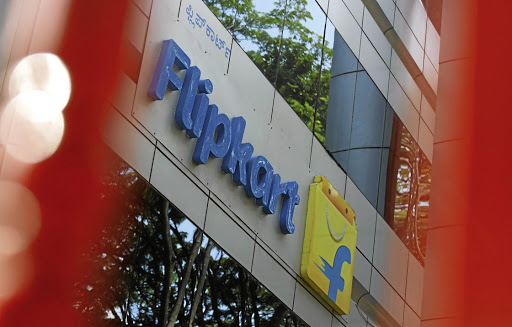 The logo of India’s e-commerce company Flipkart is seen on the company’s office in Bengaluru, India. Picture: REUTERS/ABHISHEK N CHINNAPPA

The requests, in court documents which have not been made public, but seen by Reuters, illustrate the level of concern by the two e-commerce giants over the investigation, which has prompted public spats between US firms and the Indian government.

In its investigation, the Competition Commission of India (CCI) sought a list of Amazon and Flipkart’s top sellers, online discounts and pacts with smartphone makers, among 32 questions it asked on July 15, the documents show.

Flipkart told the Supreme Court the details sought reinforced its fear of the “invasive nature” of the investigation, and asked for the information request and the overall investigation to be put on hold.

“The information sought ... is sensitive in nature,” Flipkart said in the court document. “It is evident that the director-general is determined to take precipitative action,” it added, referring to the watchdog’s investigation chief.

Amazon made a similar request of the court, saying the watchdog had sought a “wealth of sensitive information within a deadline as short as 15 days”.

Both firms said the investigation could affect their reputation and goodwill. The court is likely to take up the case in coming days.

Flipkart, Amazon and the CCI did not respond to a request for comment.

India’s trade minister and a southern court have said the companies should not shy away from inquiries, but Amazon and Flipkart say the CCI lacks evidence and should not have started the investigation last year.

The request to the Supreme Court comes after the state court dismissed the companies’ pleas in June and July.

The antitrust body, which has set the companies a July 30 deadline to answer its queries, had plans to speed up the investigation into Amazon and Flipkart after the clearance from the court, Reuters reported in June.

The CCI questions also sought details of policies on showcasing products on the websites of Flipkart and Amazon, and internal communication with sellers, the court documents showed.

The watchdog also asked for a list of the firms’ top 100 sellers from 2015 to 2020 and top-selling products. For Amazon, specifically, the CCI sought copies of all agreements it has signed with two of its sellers, Cloudtail and Appario.

In February, a Reuters investigation based on Amazon documents show it had given preferential treatment for years to a small group of sellers, including Cloudtail and Appario, and used them to bypass Indian law.

Indian retailers say Amazon and Flipkart favour selected sellers on their platforms, to the disadvantage of smaller players.

The companies deny any wrongdoing.

The government is targeting a ban on flash sales and ‘related sellers’, which would hit US-based Amazon and Walmart’s Flipkart
Companies
1 year ago
Next Article