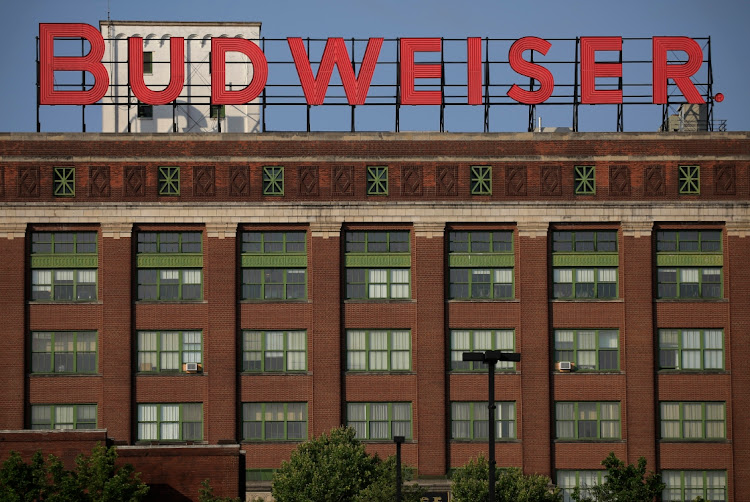 Signage outside the Anheuser-Busch Budweiser bottling facility in St Louis, Missouri, the US, on July 8 2021. Picture: BLOOMBERG/LUKE SHARRETT

A year on from its worst quarter of the Covid-19 crisis, the brewer of Budweiser, Stella Artois and Corona benefited from increased beer consumption across the Americas, in Europe and SA, including a leap of more than 50% in Colombia.

Only in China, which moved out of its coronavirus lockdown earlier in 2020, were beer volumes lower. Michel Doukeris, the former North America zone head who took over as CEO from fellow Brazilian Carlos Brito on July 1, said revenue in the April-June period was 3.2% higher than in the same period of 2019.

AB InBev retained its forecast that earnings before interest, tax, depreciation and amortisation (ebitda) would grow by between 8% and 12% this year, with revenue increasing by a faster pace with healthy volumes and prices.

In the second quarter, the figure rose 31% on a like-for-like basis to $4.85bn, against consensus expectations for a 35% increase, according to a company-compiled consensus.

Still, the company sounded a note of caution, saying its outlook reflected its current assessment of the scale and magnitude of the pandemic and could be subject to change.

In a clear sign that the pandemic and related restrictions are not over, SA instituted a new alcohol sales ban for four weeks from late June and ongoing curbs in South Korea led to lower beer sales there.

The brewer also reported lower profits in its two biggest markets, the US and Brazil, as costs such as of cans and distribution rose.

In Europe, the Middle East and Africa, beer volumes fell 6% due to lockdowns
Companies
9 months ago

The beer giant worked with social norms experts to refurbish its offices, providing a window into what to expect from big companies elsewhere
Companies
1 year ago
Next Article