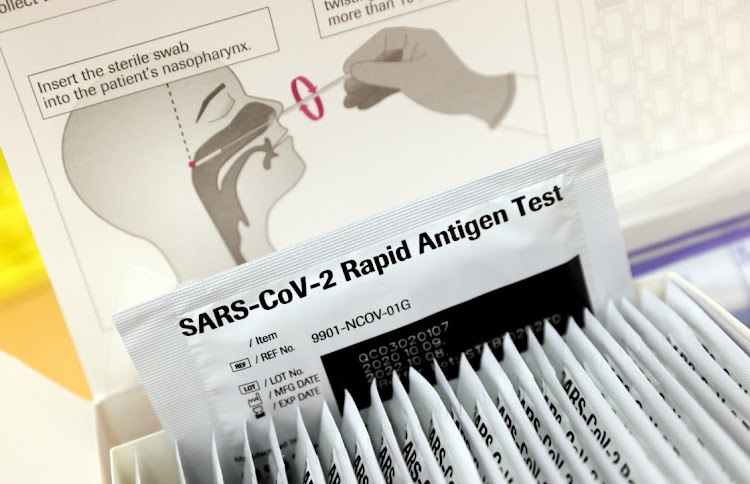 A box of rapid Covid-19 antigenic tests made by Swiss drugmaker Roche is pictured at the University Hospital in Lausanne, Switzerland, in this November 13 2020 file photo. Picture: REUTERS/DENIS BALIBOUSE

Swiss healthcare company Roche said growth momentum for its Covid-19 testing business will probably abate in the coming months, signalling a levelling off of the jackpot that has fuelled sales recently.

Roche’s diagnostics unit swiftly developed an array of tests in response to the pandemic, buoying sales and making up for a more difficult time at the pharmaceuticals division, where ageing cancer medicines face competition.

The test growth will probably slow in the second half of the year though it won’t melt entirely, the company said. The stock fell as much as 1.8% in Zurich trading.

“This virus will stay with us,” CEO Severin Schwan said on a conference call. “It will continue to mutate, and as such there will be a continued need for vaccines, for new vaccines and boosters, as well as tests and medicines.”

Much of the slowdown in testing that Roche expects is due to the comparison with 2020 sales, Schwan said in a television interview. The company developed Covid diagnostic tools in the first half of 2020 and sales took off in the second half, creating a much higher base for comparison.

The comments on tests came as the company reported first-half profit that beat estimates. Earnings per share rose to Sf10.56 from Sf10.44 excluding certain, the Basel-based company said in a statement. Analysts expected Sf10.18 share in a survey.

The company is “very confident” about meeting its full-year forecast. It estimates that sales and earnings excluding certain items will grow by a low- to mid-single-digit percentage.

Two medicines in Roche’s pipeline of experimental drugs are attracting scrutiny: a pill for Covid and a new Alzheimer’s disease treatment.

The Covid antiviral is in the second stage of testing and the results from the third — and final — level of trials should be available by the end of the year, Schwan said.

On Roche’s plans for Gantenerumab, the experimental therapy being studied for Alzheimer’s disease, the company will hold discussions with the US Food and Drug Administration about accelerating approval while it completes an ongoing clinical trial, Schwan said.

The Alzheimer’s landscape shifted after the US’s controversial approval last month of Biogen’s Aduhelm drug, which was seen as a positive sign for the Roche medicine despite recent setbacks.

Roche’s pharmaceutical unit showed signs of a turnaround in recent months, though competition from biosimilar copies of the company’s older cancer medicines continued to weigh on sales growth. Sales of the oncology drug Avastin dropped 40% in the first half.

More than 3,000 lawsuits have been filed over the opioid crisis against a range of firms for allegedly downplaying the risk of the drugs and for lax ...
Companies
1 week ago

Biovac becomes the first company in Africa to manufacture mRNA Covid-19 vaccines in a deal Ramaphosa says will contribute to the continent’s health ...
National
1 week ago