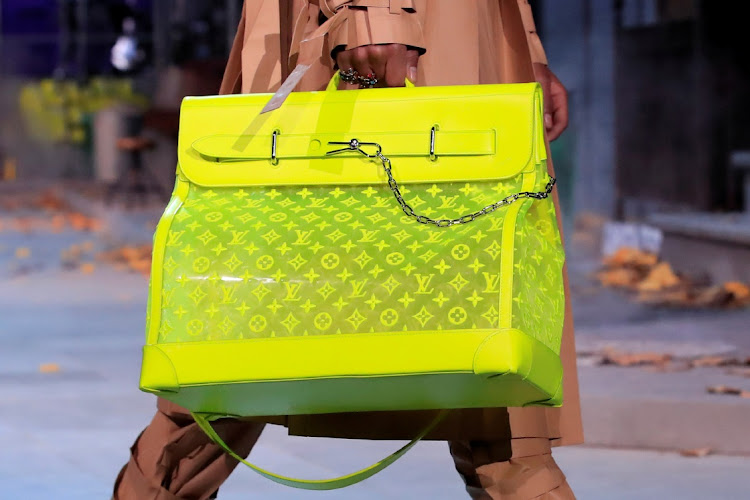 A model presents a bag creation by designer Virgil Abloh during a preview show for his Fall/Winter 2019/2020 collection for fashion house Louis Vuitton. Picture: REUTERS/GONZALO FUENTES

As part of the agreement, LVMH will buy a 60% stake in Abloh’s street-style fashion brand Off-White for an undisclosed price. Besides his expanded role, Abloh will continue as the creative director of the Louis Vuitton men's wear line, the French company said Tuesday.

LVMH founder Bernard Arnault is trying to stitch together the disparate parts of his empire, expanding recently with the purchase of a 50% stake in Jay-Z’s Champagne Armand de Brignac and preparing the opening in September of a Cheval Blanc hotel next to La Samaritaine department store in Paris. Through L Catterton, a private equity fund backed by his fortune, Arnault also made notable purchases such as German sandal maker Birkenstock for €4bn.

It’s a move away from the more traditional Dior and Louis Vuitton classics that made Arnault one of the richest men in the world. New ventures such as Off-White offset LVMH’s fashion and leather goods unit, which still makes more than 60% of total profit at the group.

Abloh, whose street-smart fashion stands in contrast with some of LVMH’s more traditional brands, is part of a new generation of luxury masterminds. LVMH will be able to help Off-White expand into new categories beyond fashion, according to Abloh, who said the goal of the partnership is more “disruption”.

The designer is becoming one of the most powerful Black executives in the luxury industry. LVMH, whose executive committee is all White and only includes two women, is betting that its collaboration with the social media star will help keep a finger on trends ranging from video games and streetwear to concerns about diversity and inclusion. Abloh has more than 6-million followers on Instagram, a lot more than other creative directors at Louis Vuitton and Christian Dior.

LVMH’s recent experiences with star-led brands haven’t always worked. A collaboration to create a ready-to-wear line with Rihanna was suspended as the brand failed to attract enough customers during lockdowns.

Abloh met Michael Burke, the chair of Louis Vuitton and Tiffany, during an internship at Fendi in 2007.

“By breaking down borders and proclaiming a profoundly inclusive philosophy, Virgil has extended the reach of Louis Vuitton’s luxury world,” Burke said in the statement.

LVMH has weathered the pandemic better than peers thanks to its fashion and leather-goods unit. While the group is scheduled to report second-quarter earnings next week, analysts are already focusing on any guidance for the third quarter to see whether the appetite for luxury goods is improving.

Concerns about the economic recovery sent stocks plunging on Monday with LVMH sliding 2.2%. However, the stock has still rallied 55% in the past year.

LVMH has been hunting for acquisitions after completing its record purchase of Tiffany in January. Last week, LVMH also said it would take a minority stake in Phoebe Philo’s eponymous brand. Philo was creative director at Celine until 2018 and her designs have a loyal following.

Roaring twenties: why Richemont is soaring

Roaring twenties: why Richemont is soaring