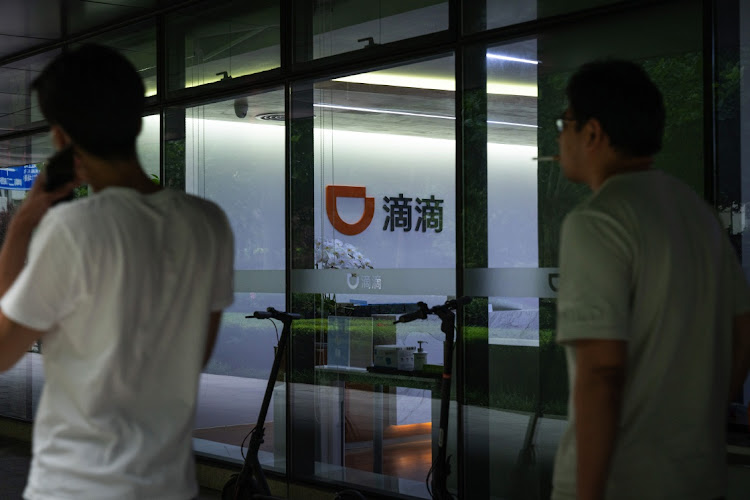 A logo is shown inside the Didi Global headquarters in Beijing, China, in this July 5 2021 file photo. Picture: BLOOMBERG/YAN CONG

New York — The Chinese version of Uber had just started trading in the US when regulators in Beijing stepped in and all but halted growth in its biggest market.

The actions that China’s cyberspace regulator took this week against Didi Global — in the name of domestic security — complicated the picture for investors betting on the country’s tech giants. Didi’s share price fell as much as 25% on Monday before paring some losses.

Last week, Didi made the second-largest US initial public offering for a Chinese firm, raising $4.4bn. It had an initial 29% pop but then fell again, ending the day 1% above the IPO price with a market value of $68bn. It’s not a household name in the US yet, but Didi is ubiquitous in China.

In all, China’s technology giants have wiped out a combined $823bn since their February peaks.

The latest crackdown by the Cyberspace Administration of China — preventing new Didi users from signing up — and China’s State Council pledging to increase regulations regarding data security has left traders wondering how far the actions will go.

Here’s what you need to know about Didi, and the case for and against investing in the China tech space:

How is Didi doing?

After Didi bought Uber’s Chinese operations in 2016, it became by far the dominant player in the ride-hailing market there. In the fourth quarter of 2020, the company accounted for 88% of total trips taken in China.

Still, it wasn’t immune to the pandemic’s pain. The company posted a net loss of $1.6bn on revenue of $21.6bn in 2020, according to its filings with the US Securities and Exchange Commission (SEC). This year is looking brighter, with the firm reporting net income of $837m in the first quarter.

It’s also expanding into areas such as car repairs and grocery delivery, and is said to be exploring an expansion of services into Western Europe. Meanwhile, it’s continuing to research autonomous driving technology.

What’s the case for buying?

If you trust Wall Street’s biggest names. Goldman Sachs, Morgan Stanley and JPMorgan Chase led the IPO last week, and Didi appointed 20 advisers to manage it. There’s also the fact that Japan’s SoftBank Group is its largest shareholder with more than 20%, and Chinese social networking giant Tencent Holdings has a stake as well.

If you’re looking to diversify. US stocks have surged since the pandemic last year, with the S&P now up more than 90% from its lows in March 2020. But how long can that continue? Some investors interested in spreading risk will look to foreign markets.

“China is an area of the world that has had a track record of huge amounts of GDP growth, and if you think that can occur here, that is what is catnip to investors,” said Kim Forrest, CIO of Bokeh Capital Partners.

If you want to bargain hunt. Some may see Didi’s stock as a buying opportunity. If the shares rebound, it could make the current price look like a steal.

If you’re bullish on the future of ride-hailing. The success of companies such as Uber and Lyft in the US is convincing some that the car-sharing industry overall has huge potential, especially as travel rebounds post-pandemic. The personal vehicle infrastructure in China also presents advantages to Didi, according to Nick Colas and Jessica Rabe of DataTrek Research.

“It’s hard to get a permit to own a car in many cities because local governments need to manage congestion and pollution,” they wrote in a note last week. “Ride-hailing is a sensible answer, and as the country grows increasingly affluent, more people will be able to afford the service.”

What are the reasons to steer clear?

If you’re worried about China’s security probes. China’s State Council issued a statement on Tuesday pledging to increase its oversight of data security and overseas listings. The nation has continually expressed concerns about the information that tech firms hold. For instance, Didi has data for 500-million annual active users. That’s already sent the Nasdaq’s Golden Dragon China Index, which tracks Chinese ADRs, plunging and the pain could continue if further restrictions are enacted.

“I would be very cautious on thinking Didi is a deal right now,” said Max Gokhman, head of asset allocation at Pacific Life Fund Advisors.

If you remember Ant and Alibaba. This is the latest example of President Xi Jinping’s actions when it comes to China’s technology firms. In November, the government shocked markets by halting Ant’s IPO.

There have also been antitrust investigations into Alibaba, resulting in a record $2.8bn fine. “I think the risks are too high,” said Matt Maley, chief market strategist for Miller Tabak & Co. “Let’s face it, Alibaba is a great company, but its stock has fallen over 30% since its problems with the Chinese government last year despite the strong rise in the US stock market.”

If you have concerns about the US government getting tough. The SEC is getting more strict on Chinese companies and may delist those that won’t reveal certain financial information to regulators. The Biden administration is continuing an effort, started under former President Donald Trump, to access audits of foreign firms.

If you prefer investing in ETFs and mutual funds. Right now, Didi is probably too new to be featured in any products tracking passive indices. There are a slate of ETFs tracking Chinese tech companies, such as KraneShares CSI China internet Fund and Invesco’s Golden Dragon China ETF, but they don’t include Didi. KWEB is down more than 17% this year, which is why Christian Fromhertz at Tribeca Trade Group won’t be investing in Didi.

“China adds an extra level of risk, and I don’t like what I see right now in the KWEB ETF — it’s breaking down,” he said.

If you’re not a fan of volatility. On its first day, Didi’s American depository shares gained 29% from the $14 offer price before falling to close the day just 1% higher. That’s not uncommon for IPOs, but it also means there could be a wild ride ahead. Add China’s heavy-handed regulators, and price swings are almost guaranteed. On Tuesday, shares fell as much as 25% to $11.58 before closing at $12.49.