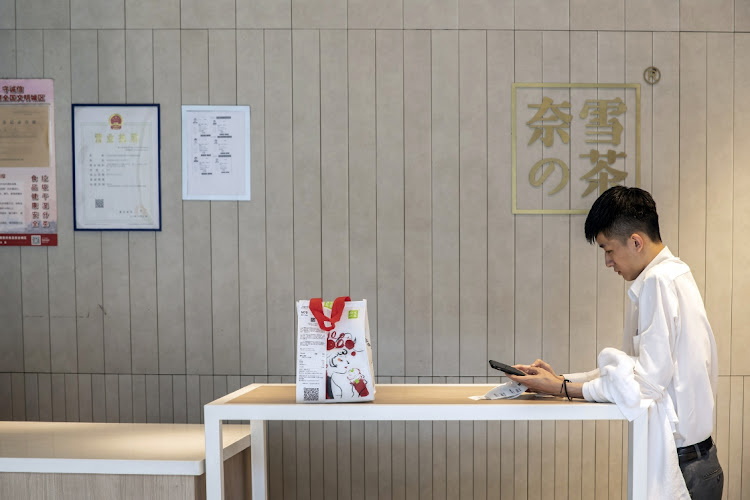 A customer waits for his order inside a Nayuki Holdings Ltd. bubble tea store in Shanghai, China. Picture: QILAL SHEN

Back in 2014, Peng Xin and her husband, Zhao Lin, pledged their home as collateral for a bank loan to get their fledgling bubble tea business off the ground.

Today, the company they founded, Nayuki Holdings, is valued at $3.8bn, even after the stock slumped on Wednesday on its debut in Hong Kong. The couple’s stakes are each worth about $1.1bn, according to the Bloomberg Billionaires Index.

“It wasn’t a reckless decision,” Peng, an executive director and the company’s GM, said in an interview. “We spent almost two years testing our drinks on the street before opening our first store.”

Nayuki, which started with three branches in the southern Chinese city of Shenzhen, is riding a boom in the market for high-end tea drinks that’s seen it expand to more than 560 stores in more than 70 cities, mostly in China. But some analysts voiced concern about whether the still loss-making firm would be able to turn and stay profitable.

Bubble tea was created in Taiwan in the 1980s and later became popular elsewhere in Asia. While it’s frequently associated with tapioca balls that represent the “bubbles” in the name, Nayuki’s version often contains different items such as fresh fruits or cream cheese toppings.

Nayuki, which raised about $656m in its IPO, accounted for around 19% of the premium modern tea cafe market by total retail consumption in 2020, the company said in its IPO prospectus, citing a China Insights Industry Consultancy report. That’s the second-largest share, it said. Another major player is HeyTea, which was established in 2012 and is closely held.

Peng met and married Zhao in Shenzhen, the city that serves as the country’s technology hub. She worked as a deputy secretary general of a software company before starting the firm.

Zhao, Nayuki’s chair, previously worked at several food companies including Burger King’s Shenzhen unit. Each of the two co-founders owns about 28% of Nayuki. The company declined to comment on their net worth.

“Our family and friends were worried about us at the time,” Peng recalled, referring to how they pledged their home as collateral. “But we and our team believed in our choice.”

More than 90% of Nayuki’s outlets in mainland China are in Tier 1 and Tier 2 cities, the label that China gives to developed urban areas. It also has one store in Hong Kong and one in Japan.

The company aims to open 300 more branches in 2021 and a further 350 in 2022, Peng said. Most of them will be a new store format called Nayuki PRO, which also sells coffee and smaller-sized bakery items to lure office workers.

Nayuki has been launching a new drink every week since 2020 to keep younger customers coming back to its stores, Peng said.

She said the company gets most of its sales online after the coronavirus changed consumption habits.

“After the pandemic, we see 70% of our orders from online platforms,” she said. “Customers used to come to our stores in groups of three or four to hang out and share food, but now we find more of them just order a drink online whenever they feel like it.”

China’s tea cafe market will continue to enjoy “decent growth potential,” but whether Nayuki and other firms in the industry will achieve sustainable profitability is a concern, according to Jason Yu, MD of research firm Kantar Worldpanel Greater China.

“Modernising the entire supply chain to drive more efficiency remains the key challenge for Nayuki and its peers,” Yu said.

Nayuki may achieve a boost from its expansion, but the bigger question is whether it will be able to keep that going over the longer term, said Kenny Ng, a securities strategist at Everbright Sun Hung Kai in Hong Kong.

“I think Nayuki still has much room to improve its profitability by scaling up the store network in the next three to five years,” he said. “But the real challenges for sustainable growth will come after that.”

Peng said the company is working to cut costs and boost efficiency, such as by automating labour-intensive processes including cutting fruits and kneading dough.

“We hope Nayuki can be a brand that customers are willing to come back to every day,” she said. “We want it to become something we can do for our whole life.”

Deep-sea mining would extract cobalt, copper, nickel and manganese on the sea floor at depths of 4km-6km
World
4 months ago
Next Article