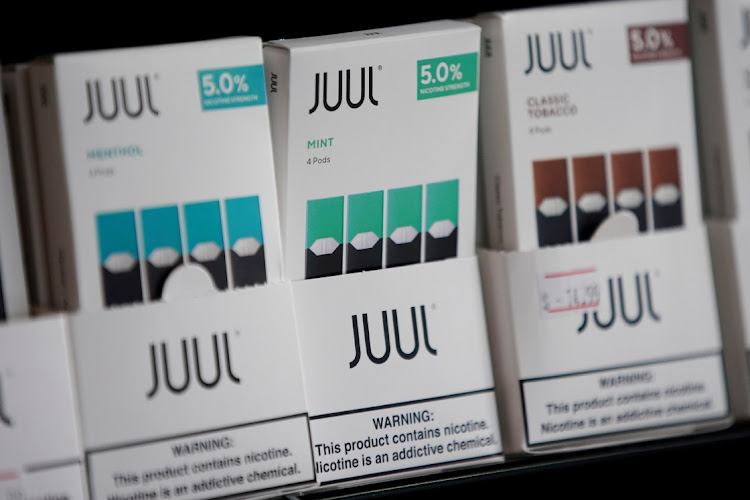 Juul vape cartridges on sale at a shop in Atlanta, Georgia, the US, September 26 2019. Picture: REUTERS/ELIJAH NOUVELAGE

Juul Labs  has struck a $40m settlement with North Carolina over a lawsuit claiming it aimed its e-cigarette products at young people, in what the state called the first such agreement to hold Juul accountable for its marketing.

North Carolina attorney-general Josh Stein and the company told a state judge of the settlement at a hearing on Monday. At a news conference afterward, Stein said Juul had agreed to “fundamentally change” its business practices, restricting “what products it sells, how and where it sells them, and who is able to buy them”, and abandoning “all marketing strategies and content that appeal to young people”.

The consent order, enforceable in North Carolina court, prohibits advertisements near schools and most social media advertising and bars Juul from making claims that compare the impact on health of using its products with that of combustible cigarettes, among other stipulations, according to the attorney-general’s office. The $40m will go to programmes for teens struggling with e-cigarette addiction and to prevent other young people from starting the habit, Stein said.

“Today, because of Juul, thousands of kids in North Carolina are addicted to nicotine, putting their long-term health at risk,” Stein said.

Juul said in a statement that the settlement “is consistent with our ongoing effort to reset our company and its relationship with our stakeholders, as we continue to combat underage usage and advance the opportunity for harm reduction for adult smokers.”

The company said it would work with Stein and with other manufacturers “on the development of potential industrywide marketing practices based on science and evidence” and said it had previously “halted all mass market product advertising”.

Indeed, some of the settlement’s requirements are in line with actions Juul had already announced, such as shuttering its social media accounts. As it is, e-cigarette makers are barred from introducing new products without permission from the US Food and Drug Administration.

Juul’s popularity had ballooned in recent years, with the company coming to dominate the e-cigarette market. That success landed it in the crosshairs of federal regulators and state attorneys-general who worried about Juul’s impact on teenagers.

North Carolina became the first state to sue Juul for allegedly advertising to minors, in May of 2019. The company’s practices helped create “an epidemic” among them, downplaying health risks and understating the strength of nicotine in its products, according the state’s complaint.

California and New York followed with similar suits that November. Juul’s legal woes expanded in February 2020 with the announcement of a 39-state probe of its teen marketing.

“Just talk to any high school principal in North Carolina and you will hear what a devastating problem this is,” Stein said.

While survey shows people are smoking more during the pandemic, global cigarette volumes remain on a downward trend
Opinion
1 year ago

RLX Technology, backed by Sequoia Capital China, is selling 116.5-million American depositary shares at $8 to $10 each, according to a US filing
World
1 year ago