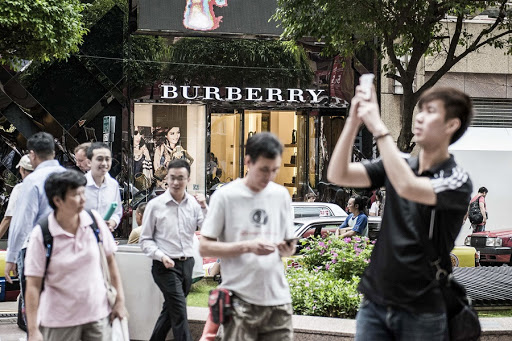 Burberry Group Plc CEO Marco Gobbetti will leave at the end of this year to take up the top post at Italy’s Salvatore Ferragamo SpA, shifting from one luxury brand in the middle of a turnaround to another that’s seeking to embark on one.

The move to Ferragamo will allow Gobbetti to return to his native Italy after years working abroad, including almost five leading the British label. But it casts a cloud over his turnaround of Burberry, which has been tapping social media buzz to attract younger luxury shoppers.

Ferragamo shares rose 3.2% early Monday in Milan, while Burberry fell as much as 9.9% in London.

With the search for a new CEO at Burberry starting only now, Monday’s announcements point to a sudden decision, Jefferies analyst Flavio Cereda said. Burberry’s board found out on Sunday about Gobbetti’s decision, according to a person familiar with the matter.

“Burberry is in a far better position today than when Marco took responsibility for it,” Sanford C. Bernstein analyst Luca Solca said in an email. “Yet the magnitude of the issues at hand didn’t offer a chance for the runway success that some had hoped for.

“Marco takes over another monumental challenge by becoming the CEO of Ferragamo. The brand needs a thorough rejuvenation of its marketing fundamentals: product and communication, first and foremost.”

Ferragamo has struggled more than most peers to appeal to a new generation of consumers. The Italian brand named Paul Andrew creative director in 2019, but he left earlier this year. It’s likely Gobbetti will be in charge of naming a new creative director who will shake up the brand once he’s at the helm of Ferragamo.

Burberry, which was also struggling to attract the Instagram crowd when Gobbetti took over, recently launched a campaign featuring Kendall Jenner showcasing the Olympia handbag. Gobbetti’s success in improving this crucial category may have made him more appealing to the Italian company, known for its shoes and bags.

Still, Burberry has trailed luxury rivals like LVMH and Kering SA in recovering from Covid-19 lockdowns, with sales remaining below 2019 levels in the latest quarter. Gobbetti will provide support to the leadership team on an “orderly transition” at Burberry, the company said.

“Gobbetti’s exit from the company by the end of the year won’t be an easy replacement, after a visible transition in the luxury brand and strength since he joined in early 2017. A seasoned visionary in the role, in our view, is the best fit — yet may not be easy to identify — in order to allow creative design to flourish in its separate role.”

Questions also remain regarding Ferragamo, notably what will happen to current CEO Micaela Le Divelec Lemmi, who’s been at the helm for almost three years. Her name wasn’t mentioned in Ferragamo’s statement. An extraordinary meeting of the board directors is scheduled for July 1.

Investors will also be interested in finding out how much Gobbetti will get paid at the Italian brand, after making £2.25m ($3.14m) at Burberry last year.

Burberry, hit hard by the pandemic, scraps its dividend

Sales in mainland China, a bright spot for the luxury goods company, are up 10%
Companies
1 year ago
Next Article