Shareholders voted to oust chairperson Osamu Nagayama, 74, as activist investors seek reform after years of scandal and allegations of mismanagement 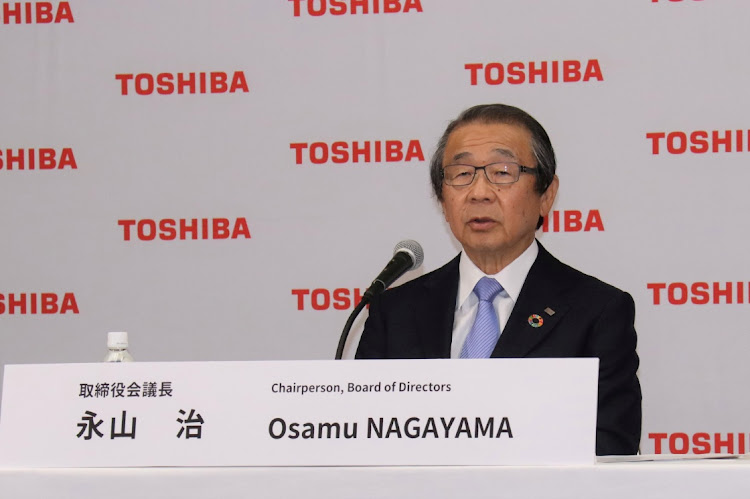 Toshiba shareholders voted to oust chairperson of the board Osamu Nagayama in a rare triumph for activist investors seeking fundamental reform after years of scandal and allegations of mismanagement.

The surprise decision on Nagayama, the 74-year-old outside director some investors opposed publicly, came after a contentious meeting with shareholders that extended for nearly three hours. His departure marks a high point in the months-long campaign by largest shareholder Effissimo Capital Management Pte to probe the company’s governance. An investigation prompted by its efforts uncovered alleged collusion with top government officials to influence last year’s board selection.

Toshiba’s shares spiked as much as 1.7% before ending largely unchanged on Friday. While investors hailed the vote as a promising sign of change, the larger task of resuscitating the ailing 145-year-old giant remains ahead. Beyond finding ways to revive revenue growth, the new leadership will have to rebuild shareholder trust.

Once a storied name in Japan, Toshiba has faded dramatically after years of management missteps. It paid a record fine in an accounting scandal and then lost billions on a bungled foray into nuclear power. The conglomerate invented flash memory three decades ago, but was forced to sell most of its prized chip business in 2018 because of losses in its nuclear-power operation. That deal led to an infusion of cash — but also a large contingent of more vocal shareholders.

One open question for Toshiba is the future of Kioxia Holdings Corp, its former memory-chip division in which it still holds the biggest stake. The company has sought to go public via an initial public offering, Bloomberg News has reported.

Toshiba may have a chance to improve company governance, revamp its midterm plan and accelerate a planned IPO of memory-chip arm Kioxia on the surprise ouster of chairman Nagayama by shareholders.

Nagayama’s ouster is highly unusual for Japan’s typically staid and conservative corporate culture. For decades, corporations like Toshiba have been run with what critics say is little regard for the interests of private shareholders. But activist investors have gone from largely impotent onlookers to influential voices in the space of just a few years, and the company’s annual general meeting was a new milestone. They have increasingly been flexing their muscle, as corporate governance reforms promoting shareholder value have meant management can no longer so easily dismiss external pressure.

“We hope that today’s AGM marks the beginning of a new era at Toshiba — one that will be marked by a focus on value creation, transparency to all stakeholders and a renewed commitment to building trust with shareholders,” 3D Investment Partners Pte, one of the biggest holders of Toshiba stock, said in a statement. 3D welcomed the changes to the board and indicated its optimism about the firm’s future potential.

The report looking into Toshiba’s governance marked a rare public account of Japan’s bureaucrats allegedly co-ordinating with a private company to exert control over foreign shareholders. The 139-page document by three independent investigators outlined how Toshiba management allegedly worked hand in hand with public officials in an attempt to sway the outcome of last year’s AGM. Among the officials named were Prime Minister Yoshihide Suga.

Ahead of the Friday vote, Toshiba CEO Satoshi Tsunakawa — who stepped into the post recently after the departure of under-pressure former leader Nobuaki Kurumatani — endorsed Nagayama’s handling of the current crisis and reiterated his faith in the board chair. Investors were not convinced that enough was being done to address the serious allegations levied against the company and several of them voiced passionate critiques during the meeting.

“Given Toshiba’s stature as a blue-chip company and the seniority of the government officials and management involved, the vote is a message from domestic investors that malfeasance and shareholder oppression is a matter of the past and will no longer be tolerated,” said Justin Tang, head of Asia research at United First Partners in Singapore. “This result is a sign of a paradigm shift in Japan and will only embolden activist investors whether foreign or domestic.”

Nagayama, a former chairperson of Chugai Pharmaceutical Co who also served as an outside director for Sony Group Corp, has said repeatedly that his wish was to take responsibility by resolving the crisis. Toshiba will also start looking for candidates to fill other vacant seats on the board. It decided against nominating two current board members after the report.

Toshiba’s board will meet later on Friday to discuss electing a new chairperson.

“The rejection of Nagayama was inevitable because he failed to show what exactly he can do as chair to improve the company’s deteriorated governance,” said Hideki Yasuda, an analyst at Ace Research Institute. “A real tough time is ahead for CEO Tsunakawa because finding people for vacant seats will likely be extremely difficult.”

Nobuaki Kurumatani had been under fire over an unpopular bid from CVC Capital Partners as well as allegations he pressured investors to support his ...
Companies
3 months ago
Next Article