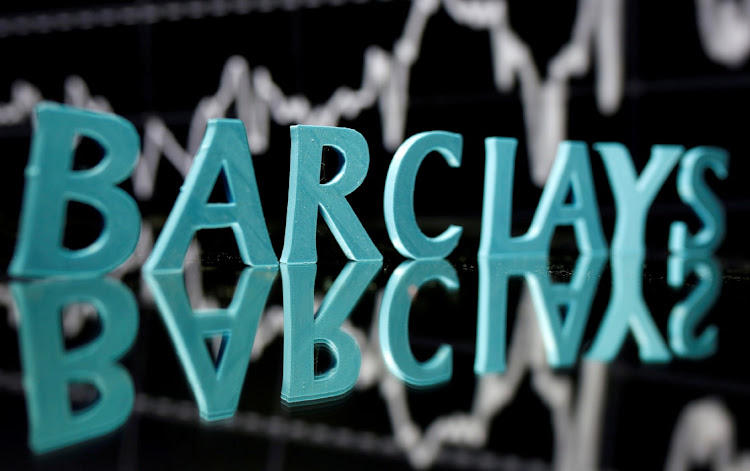 The Barclays logo is displayed in front of a stock graph in this illustration. File picture: REUTERS/DADO RUVIC

A record quarter for Barclays’ investment bankers was overshadowed by a surprise jump in costs, mixed trading results and continued pressure from Covid-19 on the retail business.

“A mixed result,” CEO Jes Staley said of the investment bank’s performance on Friday. “In our FICC business we were slightly off a very strong first quarter last year.”

It follows a recent hot streak on Wall Street and at some European peers, who were boosted in the first quarter by securities trading, special purpose acquisition companies and tech-company stock offerings.

French rival BNP Paribas SA also reported on Friday, revealing it too missed out on the global fixed-income rally.

“We thought the outperformance in corporate and investment bank relative to consensus could have been stronger following the US banks,” said John Cronin, an analyst at Goodbody.

Shares in Barclays fell as much as 7.5% in London trading.

The bank’s expenses rose 10%, busting its target on cost-income ratio, and it said costs will increase above 2020 levels this year.

Staley said this was linked to compensating investment bank staff for their performance.

“It’s a very controllable number so if our performance weakens we can take it right down again,” he said.

A review of the bank’s real estate needs as more staff work from home is due within months and could lead to one-time charges in future, finance director Tushar Morzaria told reporters.

Barclays also took a further £55m charge for doubtful loans, departing from British rivals including Lloyds Banking Group and NatWest Group who released provisions this week, but said impairment charges this year will be “materially below” 2020 as the pandemic starts to abate.

“We are trying to be prudent,” said Morzaria.

Staley said the bank could release some provisions later in the year “if the economy continues in the current path”.

However, the firm cautioned of “headwinds” persisting at Barclays UK, where income fell 8% in the first quarter. While Covid-19 cases in the UK are at the lowest level in months and half the population are at least partly vaccinated, officials have raised concerns that new variants might evade vaccines and jeopardise the return to normal life.

“There is a lot of cautious commentary on the update in relation to the demand for unsecured lending, driving an uncertain income outlook,” said Cronin.

Staley has grown the corporate and investment bank as a hedge during times of economic crisis. He promoted CS Venkatakrishnan and Paul Compton last year to further develop the division and has reaped rewards from the past year of pandemic-driven volatility and a rush of companies tapping wide-open capital markets.

Bloomberg News. For more articles like this visit bloomberg.com

The bank rewarded staff for a pandemic-related trading boom, which unions and politicians are not happy about
Companies
1 month ago

Pandemic continues to hurt the bank’s lending businesses, an impact Barclays said was likely to endure in 2021
Companies
2 months ago
Next Article