The result was driven by investment banking activities, and as its fixed-income trading business and origination and advisory services surged 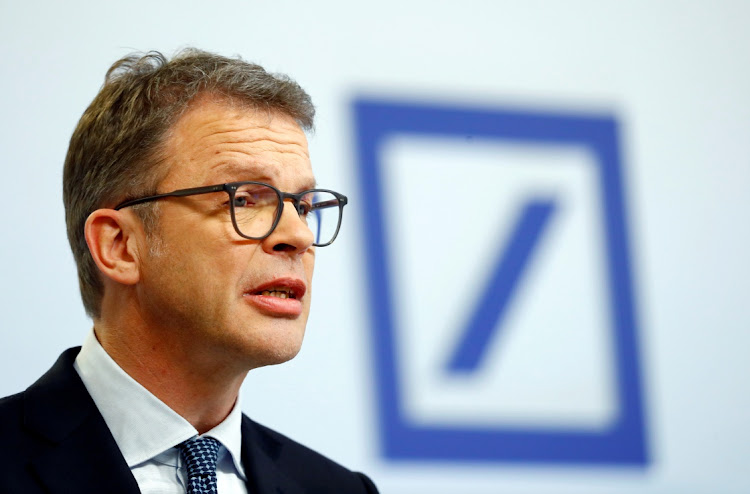 Frankfurt — Deutsche Bank posted a better-than-expected net profit for the first quarter, driven by its investment banking activities that outperformed major US rivals.

On Wednesday, the German bank reported a first-quarter net profit attributable to shareholders of €908m compared to a loss of €43m a year earlier. That beat consensus profit expectations of about €600m.

It was the strongest quarter for Deutsche since the first quarter of 2014, as revenue at its fixed-income trading business and origination and advisory services surged, trends that have also lifted profits of competing banks.

Deutsche said it now expects revenue to be essentially flat in 2021 compared with a previous estimate of marginally lower. The shares traded 5.4% higher at 8.20am GMT in Frankfurt. The bank had hoped to trim costs to €18.5bn for 2021 but additional costs of about €400m in bank levies and a German deposit protection scheme after the collapse of Greensill Bank, the lender owned by insolvent UK finance firm Greensill, could make that difficult to achieve.

The profit figures were good news for Deutsche CEO Christian Sewing, who embarked on a radical restructuring two years ago that involved shedding 18,000 staff in an effort to return the bank to profitability. “These results give us confidence that we’ll reach our 2022 targets,” Sewing said in a statement.

Analysts at Citigroup called it “an impressive quarter” but justified a “sell” rating with expectations that the bank will miss a key profitability target — an 8% return on tangible equity in 2022.

The investment bank’s resilience shone through last year, helping Deutsche eke out a small profit for 2020, its first after five years of losses.

Questions remain about the sustainability of the investment banking boom, but analysts expect Deutsche to deliver another profit in 2021, a consensus forecast of their estimates shows.

“The trajectory we are on is significantly ahead” of 2020, CFO James von Moltke told journalists when asked about profit for 2021.

Deutsche’s key fixed-income and currency sales and trading business, with revenue up 34% at nearly €2.5bn, marked its best quarter since 2015.

That growth is better than some US investment banks. Goldman Sachs reported a 31% rise in such trading in the first quarter, while those at JPMorgan were up 15%.

Origination and advisory services revenue at Deutsche, up 40%, showed its best quarter since 2017. That was partly due to its business in special purpose acquisition companies (SPACs). Asset management revenue rose 23%.

Low interest rates and a slowdown in global trade pressured revenue at Deutsche’s other divisions, such as those for corporate and retail clients, where revenue stagnated.

Daniel Pinto’s firm was bankrolling the breakaway soccer project, anticipating millions in fees, then the fans spoke out
Companies
1 year ago

The Swiss bank expects a $983m pre-tax loss in the first quarter, and that’s before the collapse of Greensill Capital is factored in
Companies
1 year ago

Before Greensill’s implosion, several banks had pulled the plug on Gupta’s Liberty House Group due to discrepancies in metals trade paperwork
World
1 year ago
Next Article